Human Actions and the Atmosphere

HS Human Actions and the Atmosphere 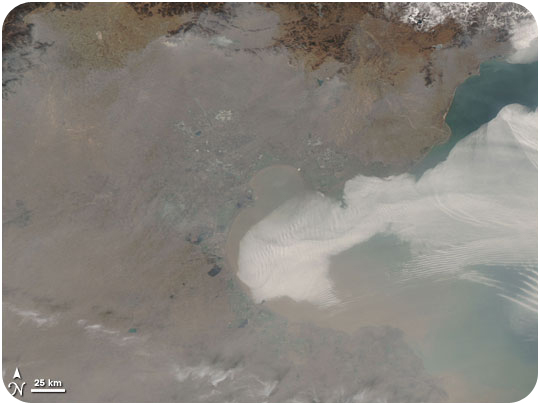 Air pollution goes hand-in-hand with industrialization as can be seen in this satellite image taken over Beijing, China. The air is a uniform brownish gray, showing that the region is thick with smog. Although legislation protects the people who live in developed nations from at least some of the problems caused by air pollution, people in many developing nations have no such protection. In China, an ongoing battle to improve the standard of living of its people has resulted in unrestrained growth and little protection from environmental damage. At least 75% of the people who live in China’s cities live with air quality that is below the national standard. Beijing is an enormous city of more than 10 million people, where many of the bicycles that have transported people for decades are being traded in for cars. Along with the increase in electricity generation from coal, and many other factors, the result is unhealthy living conditions.

There is, unfortunately, still plenty of smog in developed nations as can be seen in this chapter.

Copy of Human Actions on the Land Reading Questions.docx

Key Issue 4_ Why Are Some Human Actions Not Sustainable.pdf

Composers use texts to explore the complicated beauty and darkness of human actions and emotions.pdf

Human industrial activity is changing the chemical composition of the atmosphere

4 Layers of the Atmosphere .docx