Different representations of Earth’s surface are valuable for different purposes. Accuracy, scale, portability, and features represented are among the many factors that determine which representation is most useful.

Earth is best represented by a globe like the one seen in Figure below because Earth is a sphere. Sizes and shapes of features are not distorted and distances are true to scale. 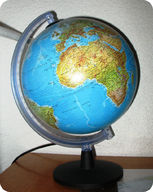 A globe is the most accurate way to represent Earth's curved surface.


Globes usually have a geographic coordinate system and a scale. The shortest distance between two points is the length of the arc (portion of a circle) that connects them.

Math problem: How would you measure the distance between two points on a globe in miles?

A location on a globe must be determined using polar coordinates because a globe is curved (Figure below). 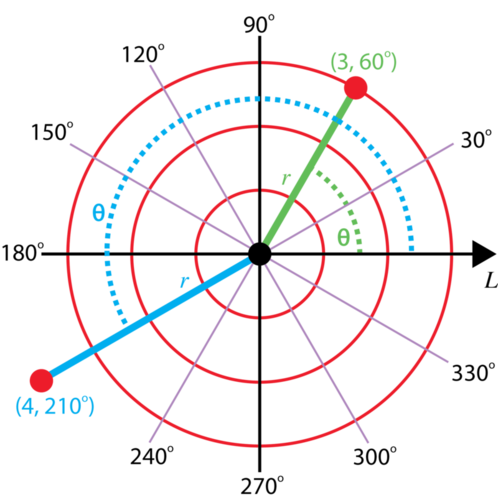 The polar coordinate system is useful for curved surfaces.


Globes are difficult to make and carry around, and they cannot be enlarged to show the details of any particular area. As a result, people need maps.

A map is a visual representation of a surface with symbols indicating important features. Different types of maps contain different information. Examples of some maps that are important in Earth science are:

Maps are 2-dimensional (2D) representations of a 3-dimensional (3D) Earth. In a small area, Earth is essentially flat, so a flat map is accurate. But to represent a larger portion of Earth, map makers must use some type of projection to collapse the third dimension onto a flat surface. A projection is a way to represent the Earth’s curved surface on flat paper. One example of a projection is shown in the Figure below.


There are two basic methods for making projections:

In 1569, Gerardus Mercator (1512-1594) developed the Mercator projection (seen in the Figure below). A flat piece of paper curves around the spherical Earth to make a cylinder. The paper touches the sphere at the equator, but the distance between the sphere and the paper increases toward the poles. The features of Earth’s surface are projected out onto the cylinder and then unrolled, creating a Mercator projection map. 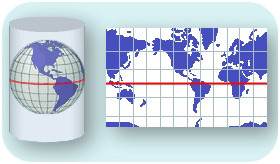 A Mercator projection translates the curved surface of Earth onto a cylinder.

In a Mercator projection, all compass directions are straight lines, but a curved line is the shortest distance between the two points. Many world maps still use Mercator projection today. Early explorers found Mercator maps useful because they visited the equatorial regions more frequently.

A good explanation of the distortion that results from the projection of a sphere onto a flat surface can be seen in Alternative World Maps.

A conic map projection uses a cone shape to better represent regions and best depicts the area where the cone touches the globe. Looking at Figure below, what is the advantage of a conic projection over a Mercator projection? 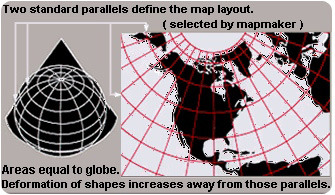 A conic map projection wraps the Earth with a cone shape rather than a cylinder.

A gnomonic projection places a flat piece of paper on a point somewhere on Earth and projects an image from that point.

In 1963, Arthur Robinson created an attractive map projection in which latitude lines are projected but meridians are curved, resulting in a map that is an ellipse rather than a rectangle (see Figure below for an example). This projection has less distortion near the poles, and features within 45 degrees of the equator are closer to their true dimensions. The distances along latitude lines are true, but the scales along each line of latitude are different. Robinson projections are still commonly used.

A Robinson projection more accurately reflects the size and shape of features near 45 degrees.

The National Geographic Society uses the Winkel Tripel Projection, which uses mathematical formulas to create a map projection that is also distorted at the edges (Figure below). 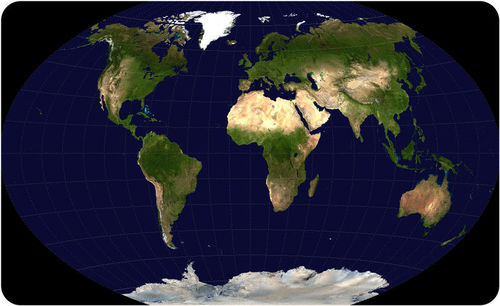 The Winkel Tripel Projection of Earth.


Locations on a map are determined using rectangular coordinates (see Figure below). 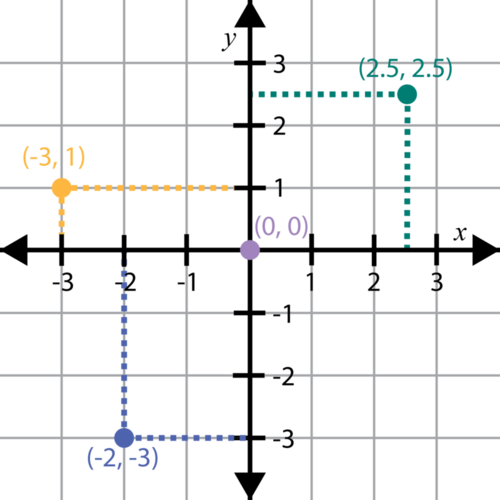 
Google Earth is a neat site to download to your computer. The maps on this site allow you to zoom in or out, look from above, tilt your image, and a lot more.