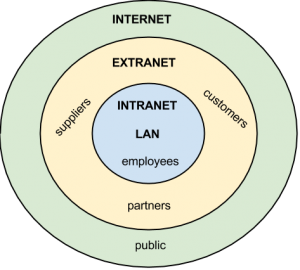 While the Internet was evolving and creating a way for organizations to connect to each other and the world, another revolution was taking place inside organizations. The proliferation of personal computers inside organizations led to the need to share resources such as printers, scanners, and data. Organizations solved this problem through the creation of local area networks (LANs), which allowed computers to connect to each other and to peripherals. These same networks also allowed personal computers to hook up to legacy mainframe computers.

An LAN is (by definition) a local network, usually operating in the same building or on the same campus. When an organization needed to provide a network over a wider area (with locations in different cities or states, for example), they would build a wide area network (WAN).

The personal computer originally was used as a stand-alone computing device. A program was installed on the computer and then used to do word processing or number crunching. However, with the advent of networking and local area networks, computers could work together to solve problems. Higher-end computers were installed as servers, and users on the local network could run applications and share information among departments and organizations. This is called client-server computing.

Just as organizations set up web sites to provide global access to information about their business, they also set up internal web pages to provide information about the organization to the employees. This internal set of web pages is called an intranet. Web pages on the intranet are not accessible to those outside the company; in fact, those pages would come up as “not found” if an employee tried to access them from outside the company’s network.

Sometimes an organization wants to be able to collaborate with its customers or suppliers while at the same time maintaining the security of being inside its own network. In cases like this a company may want to create an extranet, which is a part of the company’s network that can be made available securely to those outside of the company. Extranets can be used to allow customers to log in and check the status of their orders, or for suppliers to check their customers’ inventory levels.

Sometimes, an organization will need to allow someone who is not located physically within its internal network to gain access. This access can be provided by a virtual private network (VPN). VPNs will be discussed further in the chapter 6 (on information security).

As organizations begin to see the power of collaboration between their employees, they often look for solutions that will allow them to leverage their intranet to enable more collaboration. Since most companies use Microsoft products for much of their computing, it is only natural that they have looked to Microsoft to provide a solution. This solution is Microsoft’s SharePoint.

SharePoint provides a communication and collaboration platform that integrates seamlessly with Microsoft’s Office suite of applications. Using SharePoint, employees can share a document and edit it together – no more e-mailing that Word document to everyone for review. Projects and documents can be managed collaboratively across the organization. Corporate documents are indexed and made available for search. No more asking around for that procedures document—now you just search for it in SharePoint. For organizations looking to add a social networking component to their intranet, Microsoft offers Yammer, which can be used by itself or integrated into SharePoint.

Just as Moore’s Law describes how computing power is increasing over time, Metcalfe’s Law describes the power of networking. Specifically, Metcalfe’s Law states that the value of a telecommunications network is proportional to the square of the number of connected users of the system. Think about it this way: If none of your friends were on Facebook, would you spend much time there? If no one else at your school or place of work had e-mail, would it be very useful to you? Metcalfe’s Law tries to quantify this value.

The networking revolution has completely changed how the computer is used. Today, no one would imagine using a computer that was not connected to one or more networks. The development of the Internet and World Wide Web, combined with wireless access, has made information available at our fingertips. The Web 2.0 revolution has made us all authors of web content. As networking technology has matured, the use of Internet technologies has become a standard for every type of organization. The use of intranets and extranets has allowed organizations to deploy functionality to employees and business partners alike, increasing efficiencies and improving communications. Cloud computing has truly made information available everywhere and has serious implications for the role of the IT department.