Social epidemiology is the study of the causes and distribution of diseases. Social epidemiology can reveal how social problems are connected to the health of different populations. These epidemiological studies show that the health problems of high-income nations differ greatly from those of low-income nations. Some diseases, like cancer, are universal. But others, like obesity, heart disease, respiratory disease, and diabetes are much more common in high-income countries and are a direct result of a sedentary lifestyle combined with poor diet. High-income nations also have a higher incidence of depression (Bromet et al. 2011). In contrast, low-income nations suffer significantly from malaria and tuberculosis.

Obesity, which is on the rise in high-income nations, has been linked to many diseases, including cardiovascular problems, musculoskeletal problems, diabetes, and respiratory issues. According to the Organization for Economic Cooperation and Development (2011), obesity rates are rising in all countries, with the greatest gains being made in the highest-income countries. The United States has the highest obesity rate. Wallace Huffman and his fellow researchers (2006) contend that several factors are contributing to the rise in obesity in developed countries: 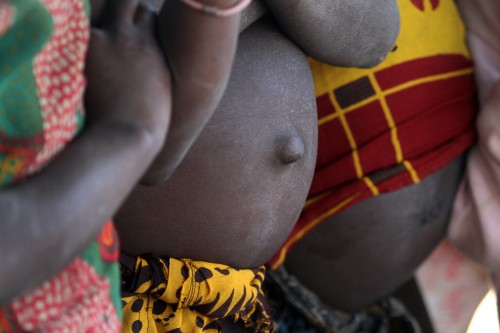 In low-income countries, malnutrition and lack of access to clean water contribute to a high child mortality rate. (Photo courtesy of Steve Evans/flickr)

In peripheral nations with low per capita income, it is not the cost of healthcare that is the most pressing concern. Rather, low-income countries must manage such problems as infectious disease, high infant mortality rates, scarce medical personnel, and inadequate water and sewer systems. Such issues, which high-income countries rarely even think about, are central to the lives of most people in low-income nations. Due to such health concerns, low-income nations have higher rates of infant mortality and lower average life spans.

One of the biggest contributors to medical issues in low-income countries is the lack of access to clean water and basic sanitation resources. According to a 2014 UNICEF report, almost half of the developing world’s population lacks improved sanitation facilities. The World Health Organization (WHO) tracks health-related data for 193 countries. In their 2011 World Health Statistics report, they document the following statistics:

Social epidemiology is the study of the causes and distribution of diseases. From a global perspective, the health issues of high-income nations tend toward diseases like cancer as well as those that are linked to obesity, like heart disease, diabetes, and musculoskeletal disorders. Low-income nations are more likely to contend with infectious disease, high infant mortality rates, scarce medical personnel, and inadequate water and sanitation systems.

social epidemiology
the study of the causes and distribution of diseases

Study this map on global life expectancies: http://openstaxcollege.org/l/global_life_expectancies. What trends do you notice?