"What the educator does in teaching is to make it possible for the students to become themselves" (Paulo Freire, Pedagogy of the Oppressed). David Simon, in his book Social Problems and the Sociological Imagination: A Paradigm for Analysis (1995), points to the notion that social problems are, in essence, contradictions—that is, statements, ideas, or features of a situation that are opposed to one another. Consider then, that one of the greatest expectations in U.S. society is that to attain any form of success in life, a person needs an education. In fact, a college degree is rapidly becoming an expectation at nearly all levels of middle-class success, not merely an enhancement to our occupational choices. And, as you might expect, the number of people graduating from college in the United States continues to rise dramatically.

The contradiction, however, lies in the fact that the more necessary a college degree has become, the harder it has become to achieve it. The cost of getting a college degree has risen sharply since the mid-1980s, while government support in the form of Pell Grants has barely increased. The net result is that those who do graduate from college are likely to begin a career in debt. As of 2013, the average of amount of a typical student's loans amounted to around $29,000. Added to that is that employment opportunities have not met expectations. The Washington Post (Brad Plumer May 20, 2013) notes that in 2010, only 27 percent of college graduates had a job related to their major. The business publication Bloomberg News states that among twenty-two-year-old degree holders who found jobs in the past three years, more than half were in roles not even requiring a college diploma (Janet Lorin and Jeanna Smialek, June 5, 2014). 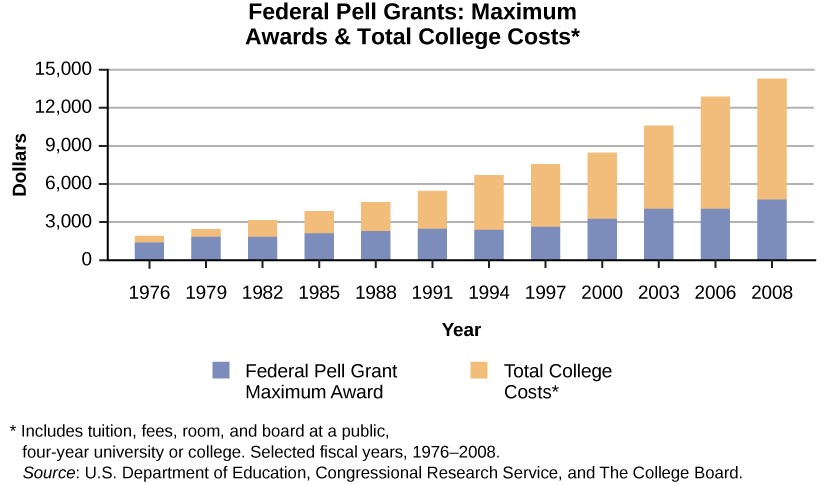 As can be seen by the trend in the graph, while the Federal Pell Grant maximum has risen slightly between 1976 and 2008, it has not been able to keep pace with the total cost of college.

Is a college degree still worth it? All this is not to say that lifetime earnings among those with a college degree are not, on average, still much higher than for those without. But even with unemployment among degree-earners at a low of 3 percent, the increase in wages over the past decade has remained at a flat 1 percent. And the pay gap between those with a degree and those without has continued to increase because wages for the rest have fallen (David Leonhardt, New York Times, The Upshot, May 27, 2014).

But is college worth more than money?

Generally, the first two years of college are essentially a liberal arts experience. The student is exposed to a fairly broad range of topics, from mathematics and the physical sciences to history and literature, the social sciences, and music and art through introductory and survey-styled courses. It is in this period that the student's world view is, it is hoped, expanded. Memorization of raw data still occurs, but if the system works, the student now looks at a larger world. Then, when he or she begins the process of specialization, it is with a much broader perspective than might be otherwise. This additional "cultural capital" can further enrich the life of the student, enhance his or her ability to work with experienced professionals, and build wisdom upon knowledge. Two thousand years ago, Socrates said, "The unexamined life is not worth living." The real value of an education, then, is to enhance our skill at self-examination.

SOCIOLOGY 1002 •  Univ of the West Indies at St. Augustine