We studied gravitational potential energy in Potential Energy and Conservation of Energy, where the value of g remained constant. We now develop an expression that works over distances such that g is not constant. This is necessary to correctly calculate the energy needed to place satellites in orbit or to send them on missions in space.

Recall that work (W) is the integral of the dot product between force and distance. Essentially, it is the product of the component of a force along a displacement times that displacement. We define $$ \text{Δ}U $$ as the negative of the work done by the force we associate with the potential energy. For clarity, we derive an expression for moving a mass m from distance $$ {r}_{1} $$ from the center of Earth to distance $$ {r}_{2}$$. However, the result can easily be generalized to any two objects changing their separation from one value to another. 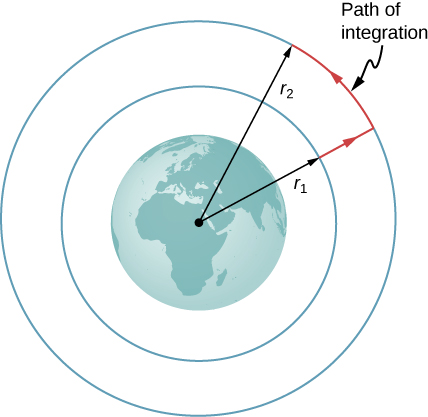 Figure 13.11 The work integral, which determines the change in potential energy, can be evaluated along the path shown in red.

Note two important items with this definition. First, $$ U\to 0\,\text{as}\,r\to \infty $$. The potential energy is zero when the two masses are infinitely far apart. Only the difference in U is important, so the choice of $$ U=0\,\text{for}\,r=\infty $$ is merely one of convenience. (Recall that in earlier gravity problems, you were free to take $$ U=0 $$ at the top or bottom of a building, or anywhere.) Second, note that U becomes increasingly more negative as the masses get closer. That is consistent with what you learned about potential energy in Potential Energy and Conservation of Energy. As the two masses are separated, positive work must be done against the force of gravity, and hence, U increases (becomes less negative). All masses naturally fall together under the influence of gravity, falling from a higher to a lower potential energy.

How much energy is required to lift the 9000-kg Soyuz vehicle from Earth’s surface to the height of the ISS, 400 km above the surface?

Use (Figure) to find the change in potential energy of the payload. That amount of work or energy must be supplied to lift the payload.

Paying attention to the fact that we start at Earth’s surface and end at 400 km above the surface, the change in U is

We insert the values

For perspective, consider that the average US household energy use in 2013 was 909 kWh per month. That is energy of

So our result is an energy expenditure equivalent to 10 months. But this is just the energy needed to raise the payload 400 km. If we want the Soyuz to be in orbit so it can rendezvous with the ISS and not just fall back to Earth, it needs a lot of kinetic energy. As we see in the next section, that kinetic energy is about five times that of $$ \text{Δ}U$$. In addition, far more energy is expended lifting the propulsion system itself. Space travel is not cheap.

which is about 6% greater than that found with the correct method.

Note that we use M, rather than $$ {M}_{\text{E}}$$, as a reminder that we are not restricted to problems involving Earth. However, we still assume that $$ m\text{<}\,\text{<}M$$. (For problems in which this is not true, we need to include the kinetic energy of both masses and use conservation of momentum to relate the velocities to each other. But the principle remains the same.)

Escape velocity is often defined to be the minimum initial velocity of an object that is required to escape the surface of a planet (or any large body like a moon) and never return. As usual, we assume no energy lost to an atmosphere, should there be any.

Consider the case where an object is launched from the surface of a planet with an initial velocity directed away from the planet. With the minimum velocity needed to escape, the object would just come to rest infinitely far away, that is, the object gives up the last of its kinetic energy just as it reaches infinity, where the force of gravity becomes zero. Since $$ U\to 0\,\text{as}\,r\to \infty $$, this means the total energy is zero. Thus, we find the escape velocity from the surface of an astronomical body of mass M and radius R by setting the total energy equal to zero. At the surface of the body, the object is located at $$ {r}_{1}=R $$ and it has escape velocity $$ {v}_{1}={v}_{\text{esc}}$$. It reaches $$ {r}_{2}=\infty $$ with velocity $$ {v}_{2}=0$$. Substituting into (Figure), we have

Solving for the escape velocity,

Substituting the values for Earth’s mass and radius directly into (Figure), we obtain

The speed needed to escape the Sun (leave the solar system) is nearly four times the escape speed from Earth’s surface. But there is help in both cases. Earth is rotating, at a speed of nearly 1.7 km/s at the equator, and we can use that velocity to help escape, or to achieve orbit. For this reason, many commercial space companies maintain launch facilities near the equator. To escape the Sun, there is even more help. Earth revolves about the Sun at a speed of approximately 30 km/s. By launching in the direction that Earth is moving, we need only an additional 12 km/s. The use of gravitational assist from other planets, essentially a gravity slingshot technique, allows space probes to reach even greater speeds. In this slingshot technique, the vehicle approaches the planet and is accelerated by the planet’s gravitational attraction. It has its greatest speed at the closest point of approach, although it decelerates in equal measure as it moves away. But relative to the planet, the vehicle’s speed far before the approach, and long after, are the same. If the directions are chosen correctly, that can result in a significant increase (or decrease if needed) in the vehicle’s speed relative to the rest of the solar system.

Visit this website to learn more about escape velocity.

If we send a probe out of the solar system starting from Earth’s surface, do we only have to escape the Sun?

The probe must overcome both the gravitational pull of Earth and the Sun. In the second calculation of our example, we found the speed necessary to escape the Sun from a distance of Earth’s orbit, not from Earth itself. The proper way to find this value is to start with the energy equation, (Figure), in which you would include a potential energy term for both Earth and the Sun.

We have simplified this discussion by assuming that the object was headed directly away from the planet. What is remarkable is that the result applies for any velocity. Energy is a scalar quantity and hence (Figure) is a scalar equation—the direction of the velocity plays no role in conservation of energy. It is possible to have a gravitationally bound system where the masses do not “fall together,” but maintain an orbital motion about each other.

We have one important final observation. Earlier we stated that if the total energy is zero or greater, the object escapes. Strictly speaking, (Figure) and (Figure) apply for point objects. They apply to finite-sized, spherically symmetric objects as well, provided that the value for r in (Figure) is always greater than the sum of the radii of the two objects. If r becomes less than this sum, then the objects collide. (Even for greater values of r, but near the sum of the radii, gravitational tidal forces could create significant effects if both objects are planet sized. We examine tidal effects in Tidal Forces.) Neither positive nor negative total energy precludes finite-sized masses from colliding. For real objects, direction is important.

How Far Can an Object Escape?

Let’s consider the preceding example again, where we calculated the escape speed from Earth and the Sun, starting from Earth’s orbit. We noted that Earth already has an orbital speed of 30 km/s. As we see in the next section, that is the tangential speed needed to stay in circular orbit. If an object had this speed at the distance of Earth’s orbit, but was headed directly away from the Sun, how far would it travel before coming to rest? Ignore the gravitational effects of any other bodies.

The object has initial kinetic and potential energies that we can calculate. When its speed reaches zero, it is at its maximum distance from the Sun. We use (Figure), conservation of energy, to find the distance at which kinetic energy is zero.

The object in this case reached a distance exactly twice the initial orbital distance. We will see the reason for this in the next section when we calculate the speed for circular orbits.

Assume you are in a spacecraft in orbit about the Sun at Earth’s orbit, but far away from Earth (so that it can be ignored). How could you redirect your tangential velocity to the radial direction such that you could then pass by Mars’s orbit? What would be required to change just the direction of the velocity?

You change the direction of your velocity with a force that is perpendicular to the velocity at all points. In effect, you must constantly adjust the thrusters, creating a centripetal force until your momentum changes from tangential to radial. A simple momentum vector diagram shows that the net change in momentum is $ \sqrt{2} $ times the magnitude of momentum itself. This turns out to be a very inefficient way to reach Mars. We discuss the most efficient way in Kepler’s Laws of Planetary Motion.

As we move to larger orbits, the change in potential energy increases, whereas the orbital velocity decreases. Hence, the ratio is highest near Earth’s surface (technically infinite if we orbit at Earth’s surface with no elevation change), moving to zero as we reach infinitely far away.

Find the escape speed of a projectile from the surface of Mars.

Find the escape speed of a projectile from the surface of Jupiter.

What is the escape speed of a satellite located at the Moon’s orbit about Earth? Assume the Moon is not nearby.

(a) Evaluate the gravitational potential energy between two 5.00-kg spherical steel balls separated by a center-to-center distance of 15.0 cm. (b) Assuming that they are both initially at rest relative to each other in deep space, use conservation of energy to find how fast will they be traveling upon impact. Each sphere has a radius of 5.10 cm.

(a) What will be the kinetic energy of the asteroid in the previous problem just before it hits Earth? b) Compare this energy to the output of the largest fission bomb, 2100 TJ. What impact would this have on Earth?

(a) What is the change in energy of a 1000-kg payload taken from rest at the surface of Earth and placed at rest on the surface of the Moon? (b) What would be the answer if the payload were taken from the Moon’s surface to Earth? Is this a reasonable calculation of the energy needed to move a payload back and forth?

escape velocity
initial velocity an object needs to escape the gravitational pull of another; it is more accurately defined as the velocity of an object with zero total mechanical energy

Measuring Gravitational Potential Energy and Kinetic Energy of a Ball on a Ramp.docx

The Total Energy of a Free Falling Table Tennis Ball.docx

Although we know that the total energy in the entire universe is alw.docx

SBI 4U •  University of Toronto, Mississauga