By the end of the section, you will be able to:

Experience suggests that an object at rest remains at rest if left alone and that an object in motion tends to slow down and stop unless some effort is made to keep it moving. However, Newton’s first law gives a deeper explanation of this observation.

A body at rest remains at rest or, if in motion, remains in motion at constant velocity unless acted on by a net external force.

Note the repeated use of the verb “remains.” We can think of this law as preserving the status quo of motion. Also note the expression “constant velocity;” this means that the object maintains a path along a straight line, since neither the magnitude nor the direction of the velocity vector changes. We can use (Figure) to consider the two parts of Newton’s first law. 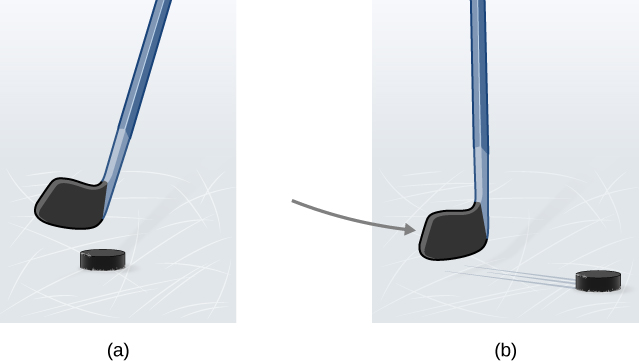 Figure 5.7 (a) A hockey puck is shown at rest; it remains at rest until an outside force such as a hockey stick changes its state of rest; (b) a hockey puck is shown in motion; it continues in motion in a straight line until an outside force causes it to change its state of motion. Although it is slick, an ice surface provides some friction that slows the puck.

Rather than contradicting our experience, Newton’s first law says that there must be a cause for any change in velocity (a change in either magnitude or direction) to occur. This cause is a net external force, which we defined earlier in the chapter. An object sliding across a table or floor slows down due to the net force of friction acting on the object. If friction disappears, will the object still slow down?

The idea of cause and effect is crucial in accurately describing what happens in various situations. For example, consider what happens to an object sliding along a rough horizontal surface. The object quickly grinds to a halt. If we spray the surface with talcum powder to make the surface smoother, the object slides farther. If we make the surface even smoother by rubbing lubricating oil on it, the object slides farther yet. Extrapolating to a frictionless surface and ignoring air resistance, we can imagine the object sliding in a straight line indefinitely. Friction is thus the cause of slowing (consistent with Newton’s first law). The object would not slow down if friction were eliminated.

Consider an air hockey table ((Figure)). When the air is turned off, the puck slides only a short distance before friction slows it to a stop. However, when the air is turned on, it creates a nearly frictionless surface, and the puck glides long distances without slowing down. Additionally, if we know enough about the friction, we can accurately predict how quickly the object slows down.

Figure 5.8 An air hockey table is useful in illustrating Newton’s laws. When the air is off, friction quickly slows the puck; but when the air is on, it minimizes contact between the puck and the hockey table, and the puck glides far down the table.

Newton’s first law is general and can be applied to anything from an object sliding on a table to a satellite in orbit to blood pumped from the heart. Experiments have verified that any change in velocity (speed or direction) must be caused by an external force. The idea of generally applicable or universal laws is important—it is a basic feature of all laws of physics. Identifying these laws is like recognizing patterns in nature from which further patterns can be discovered. The genius of Galileo, who first developed the idea for the first law of motion, and Newton, who clarified it, was to ask the fundamental question: “What is the cause?” Thinking in terms of cause and effect is fundamentally different from the typical ancient Greek approach, when questions such as “Why does a tiger have stripes?” would have been answered in Aristotelian fashion, such as “That is the nature of the beast.” The ability to think in terms of cause and effect is the ability to make a connection between an observed behavior and the surrounding world.

Regardless of the scale of an object, whether a molecule or a subatomic particle, two properties remain valid and thus of interest to physics: gravitation and inertia. Both are connected to mass. Roughly speaking, mass is a measure of the amount of matter in something. Gravitation is the attraction of one mass to another, such as the attraction between yourself and Earth that holds your feet to the floor. The magnitude of this attraction is your weight, and it is a force.

Mass is also related to inertia, the ability of an object to resist changes in its motion—in other words, to resist acceleration. Newton’s first law is often called the law of inertia. As we know from experience, some objects have more inertia than others. It is more difficult to change the motion of a large boulder than that of a basketball, for example, because the boulder has more mass than the basketball. In other words, the inertia of an object is measured by its mass. The relationship between mass and weight is explored later in this chapter.

Earlier, we stated Newton’s first law as “A body at rest remains at rest or, if in motion, remains in motion at constant velocity unless acted on by a net external force.” It can also be stated as “Every body remains in its state of uniform motion in a straight line unless it is compelled to change that state by forces acting on it.” To Newton, “uniform motion in a straight line” meant constant velocity, which includes the case of zero velocity, or rest. Therefore, the first law says that the velocity of an object remains constant if the net force on it is zero.

Finally, no particular inertial frame is more special than any other. As far as the laws of nature are concerned, all inertial frames are equivalent. In analyzing a problem, we choose one inertial frame over another simply on the basis of convenience.

We can give Newton’s first law in vector form:

This equation says that a net force of zero implies that the velocity $$ \overset{\to }{v} $$ of the object is constant. (The word “constant” can indicate zero velocity.)

Newton’s first law is deceptively simple. If a car is at rest, the only forces acting on the car are weight and the contact force of the pavement pushing up on the car ((Figure)). It is easy to understand that a nonzero net force is required to change the state of motion of the car. However, if the car is in motion with constant velocity, a common misconception is that the engine force propelling the car forward is larger in magnitude than the friction force that opposes forward motion. In fact, the two forces have identical magnitude.

When Does Newton’s First Law Apply to Your Car?

Newton’s laws can be applied to all physical processes involving force and motion, including something as mundane as driving a car.

(a) Your car is parked outside your house. Does Newton’s first law apply in this situation? Why or why not?

(b) Your car moves at constant velocity down the street. Does Newton’s first law apply in this situation? Why or why not?

As this example shows, there are two kinds of equilibrium. In (a), the car is at rest; we say it is in static equilibrium. In (b), the forces on the car are balanced, but the car is moving; we say that it is in dynamic equilibrium. (We examine this idea in more detail in Static Equilibrium and Elasticity.) Again, it is possible for two (or more) forces to act on an object yet for the object to move. In addition, a net force of zero cannot produce acceleration.

A skydiver opens his parachute, and shortly thereafter, he is moving at constant velocity. (a) What forces are acting on him? (b) Which force is bigger?

a. His weight acts downward, and the force of air resistance with the parachute acts upward. b. neither; the forces are equal in magnitude

Engage this simulation to predict, qualitatively, how an external force will affect the speed and direction of an object’s motion. Explain the effects with the help of a free-body diagram. Use free-body diagrams to draw position, velocity, acceleration, and force graphs, and vice versa. Explain how the graphs relate to one another. Given a scenario or a graph, sketch all four graphs.

Taking a frame attached to Earth as inertial, which of the following objects cannot have inertial frames attached to them, and which are inertial reference frames?

(a) A car moving at constant velocity

(b) A car that is accelerating

(c) An elevator in free fall

A woman was transporting an open box of cupcakes to a school party. The car in front of her stopped suddenly; she applied her brakes immediately. She was wearing her seat belt and suffered no physical harm (just a great deal of embarrassment), but the cupcakes flew into the dashboard and became “smushcakes.” Explain what happened.

The cupcake velocity before the braking action was the same as that of the car. Therefore, the cupcakes were unrestricted bodies in motion, and when the car suddenly stopped, the cupcakes kept moving forward according to Newton’s first law.

inertia
ability of an object to resist changes in its motion

Newton’s first law of motion
body at rest remains at rest or, if in motion, remains in motion at constant velocity unless acted on by a net external force; also known as the law of inertia

the laws of motion and friction.docx