Predicting the Products of Electrolysis

Electrolysis is a way of separating a compound by passing an electric current through it; the products are the compound's component ions.

Predict the products of an electrolysis reaction

The main components required to achieve electrolysis are:

The Interchange of Atoms and Ions

The key process of electrolysis is the interchange of atoms and ions by the removal or addition of electrons to the external circuit. The required products of electrolysis are in a different physical state from the electrolyte and can be removed by some physical processes.

Each electrode attracts ions that are of the opposite charge. Positively charged ions, or cations, move toward the electron-providing cathode, which is negative; negatively charged ions, or anions, move toward the positive anode. You may have noticed that this is the opposite of a galvanic cell, where the anode is negative and the cathode is positive.

Predicting the Products of Electrolysis

Let's look at how to predict the products. For example, what two ions will CuSO4 break down into? The answer is Cu2+ and SO42-. Let's look more closely at this reaction. 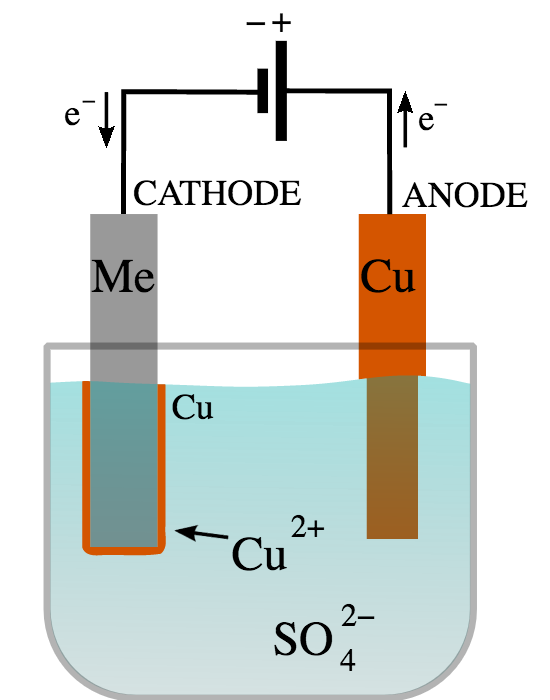 Electrolysis of copper sulfate: Two copper electrodes are placed in a solution of blue copper sulfate and are connected to a source of electrical current. The current is turned on for a period of time.

We take two copper electrodes and place them into a solution of blue copper sulfate (CuSO4) and then turn the current on. We notice that the the initial blue color of the solution remains unchanged, but it appears that copper has been deposited on one of the electrodes but dissolved on the other. This is because Cu2+ ions are attracted to the negatively charged cathode, and since the the cathode is putting out electrons, the Cu2+ becomes reduced to form copper metal, which is deposited on the electrode. The reaction at this electrode is:

At the positive anode, copper metal is oxidized to form Cu2+ ions. This is why it appears that the copper has dissolved from the electrode. The reaction at this electrode is:

As we have covered, electrolysis is the passage of a direct electric current through an ionic substance that is either molten or dissolved in a suitable solvent. This results in chemical reactions at the electrodes and the separation of materials. Two commonly used methods of electrolysis involve molten sodium chloride and aqueous sodium chloride. You might think that both methods would give you the same products, but this not the case. Let's go through each of the methods to understand the different processes.

If sodium chloride is melted (above 801 °C), two electrodes are inserted into the melt, and an electric current is passed through the molten salt, then chemical reactions take place at the electrodes. 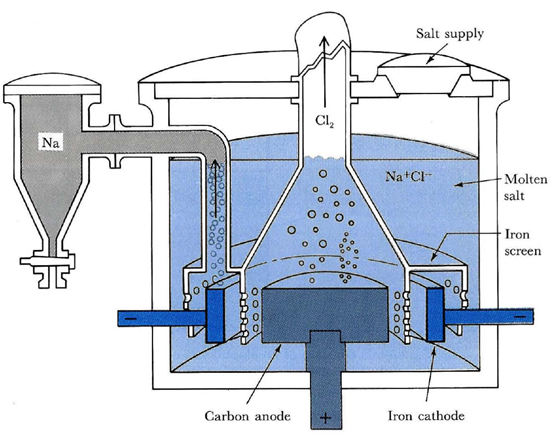 Sodium ions migrate to the cathode, where electrons enter the melt and are reduced to sodium metal:

Chloride ions migrate the other way, toward the anode. They give up their electrons to the anode and are oxidized to chlorine gas:

The overall reaction is the breakdown of sodium chloride into its elements:

What happens when we have an aqueous solution of sodium chloride? Well, we can't forget that we have to factor water into the equation. Since water can be both oxidized and reduced, it competes with the dissolved Na+ and Cl- ions. Rather than producing sodium, hydrogen is produced.

The reaction at the cathode is:

The reaction at the anode is:

The overall reaction is as follows:

Reduction of Na+ (E° = –2.7 v) is energetically more difficult than the reduction of water (–1.23 v), so in aqueous solution, the latter will prevail.

Pure water cannot undergo significant electrolysis without an electrolyte, such as an acid or a base.


Pure water cannot undergo significant electrolysis without adding an electrolyte. If the object is to produce hydrogen and oxygen, the added electrolyte must be energetically more difficult to oxidize or reduce than water itself. For example, electrolysis of a solution of sulfuric acid or of a salt, such as NaNO3, results in the decomposition of water at both electrodes:

Multiplying the cathode reaction by 2, in order to match the number of electrons transferred, results in this net equation, after OH- and H+ ions combine to form water:

Johann Ritter, who went on to invent the first electrochemical cell, was one of the first people to discover the decomposition of water by electricity. 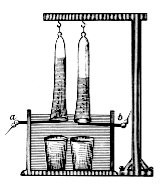 The amount of chemical change that occurs in electrolysis is stoichiometrically related to the amount of electrons that pass through the cell.

Predict how many coulombs a given electrochemical reaction will require

Stoichiometry of an Electrolytic Cell

The extent of chemical change that occurs in an electrolytic cell is stoichiometrically related to the number of moles of electrons that pass through the cell. From the perspective of the voltage source and circuit outside the electrodes, the flow of electrons is generally described in terms of electrical current using the SI units of coulombs and amperes. It takes 96,485 coulombs to constitute a mole of electrons, a unit known as the faraday (F).

This relation was first formulated by Michael Faraday in 1832, in the form of two laws of electrolysis:

The equivalent weight of a substance is defined as the molar mass divided by the number of electrons required to oxidize or reduce each unit of the substance. Thus, one mole of V3+ corresponds to three equivalents of this species, and will require three faradays of charge to deposit it as metallic vanadium (
V3++3e−→V
).

Most stoichiometric problems involving electrolysis can be solved without explicit use of Faraday's laws. The "chemistry" in these problems is usually very elementary; the major difficulties usually stem from unfamiliarity with the basic electrical units:

A metallic object to be plated with copper is placed in a solution of CuSO4. What mass of copper will be deposited if a current of 0.22 amp flows through the cell for 1.5 hours?

To solve, set up a dimensional analysis equation:

What if this question were asked in a different fashion? How would you go about solving it?

Education is a very important and most powerful tool for anyone.docx