The New Deal in the South 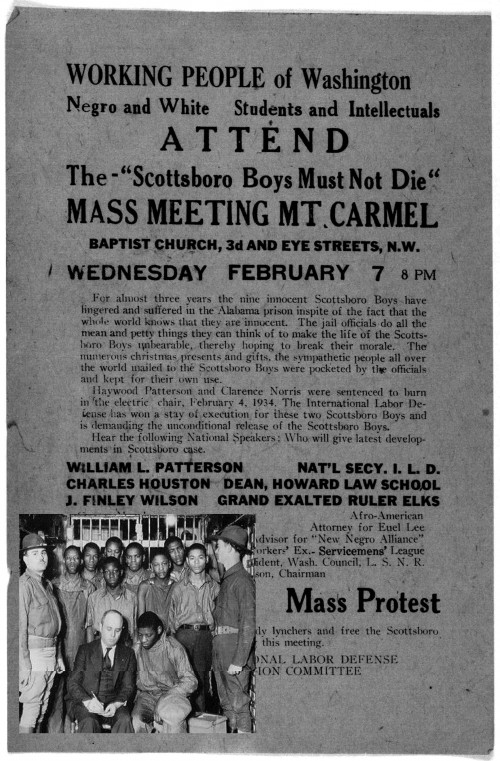 The accusation of rape brought against the so-called Scottsboro Boys, pictured with their attorney in 1932, generated controversy across the country. “The Scottsboro Boys, with attorney Samuel Leibowitz, under guard by the state militia, 1932.” Wikipedia.

The impact of initial New Deal legislation was readily apparent in the South, a region of perpetual poverty especially plagued by the Depression. In 1929 the average per capita income in the American Southeast was $365, the lowest in the nation. Southern farmers averaged $183 per year at a time when farmers on the West Coast made more than four times that. Moreover, they were trapped into the production of cotton and corn, crops that depleted the soil and returned ever-diminishing profits. Despite the ceaseless efforts of civic boosters, what little industry the South had remained low-wage, low-skilled, and primarily extractive. Southern workers made significantly less than their national counterparts: 75% of non-southern textile workers, 60% of iron and steel workers, and a paltry 45% of lumber workers. At the time of the crash, southerners were already underpaid, underfed, and undereducated.

Major New Deal programs were designed with the South in mind. FDR hoped that by drastically decreasing the amount of land devoted to cotton, the AAA would arrest its long-plummeting price decline. Farmers plowed up existing crops and left fields fallow, and the market price did rise. But in an agricultural world of land-owners and landless farmworkers (such as tenants and sharecroppers), the benefits of the AAA bypassed the southerners who needed them most. The government relied on land owners and local organizations to distribute money fairly to those most affected by production limits, but many owners simply kicked tenants and croppers off their land, kept the subsidy checks for keeping those acres fallow, and reinvested the profits in mechanical farming equipment that further suppressed the demand for labor. Instead of making farming profitable again, the AAA pushed landless southern farmworkers off the land.

But Roosevelt’s assault on southern poverty took many forms. Southern industrial practices attracted much attention. The NRA encouraged higher wages and better conditions. It began to suppress the rampant use of child labor in southern mills, and, for the first time, provided federal protection for unionized workers all across the country. Those gains were eventually solidified in the 1938 Fair Labor Standards Act, which set a national minimum wage of $0.25/hour (eventually rising to .40/hour). The minimum wage disproportionately affected low-paid southern workers, and brought southern wages within the reach of northern wages.

The president’s support for unionization further impacted the South. Southern industrialists had proven themselves ardent foes of unionization, particularly in the infamous southern textile mills. In 1934, when workers at textile mills across the southern Piedmont struck over low wages and long hours, owners turned to local and state authorities to quash workers’ groups, even as they recruited thousands of strikebreakers from the many displaced farmers swelling industrial centers looking for work. But in 1935 the National Labor Relations Act, also known as the Wagner Act, guaranteed the rights of most workers to unionize and bargain collectively. And so unionized workers, backed by the support of the federal government and determined to enforce the reforms of the New Deal, pushed for higher wages, shorter hours, and better conditions. With growing success, union members came to see Roosevelt as a protector or workers’ rights. Or, as one union leader put it, an “agent of God.”

Perhaps the most successful New Deal program in the South was the Tennessee Valley Authority (TVA), an ambitious program to use hydroelectric power, agricultural and industrial reform, flood control, economic development, education, and healthcare, to radically remake the impoverished watershed region of the Tennessee River. Though the area of focus was limited, Roosevelt’s TVA sought to “make a different type of citizen” out of the area’s penniless residents. The TVA built a series of hydroelectric dams to control flooding and distribute electricity to the otherwise non-electrified areas at government-subsidized rates. Agents of the TVA met with residents and offered training and general education classes to improve agricultural practices and exploit new job opportunities. The TVA encapsulates Roosevelt’s vision for uplifting the South and integrating it into the larger national economy.

Roosevelt initially courted conservative southern Democrats to ensure the legislative success of the New Deal, all but guaranteeing that the racial and economic inequalities of the region remained intact, but, by the end of his second term, he had won the support of enough non-southern voters that he felt confident in confronting some of the region’s most glaring inequalities. Nowhere was this more apparent than in his endorsement of a report, formulated by a group of progressive southern New Dealers, entitled “A Report on Economic Conditions in the South.” The pamphlet denounced the hardships wrought by the southern economy—in his introductory letter to the Report, called the region “the Nation’s No. 1 economic problem”—and blasted reactionary southern anti-New Dealers. He suggested that the New Deal could save the South and thereby spur a nationwide recovery. The Report was among the first broadsides in Roosevelt’s coming reelection campaign that addressed the inequalities that continued to mark southern and national life.