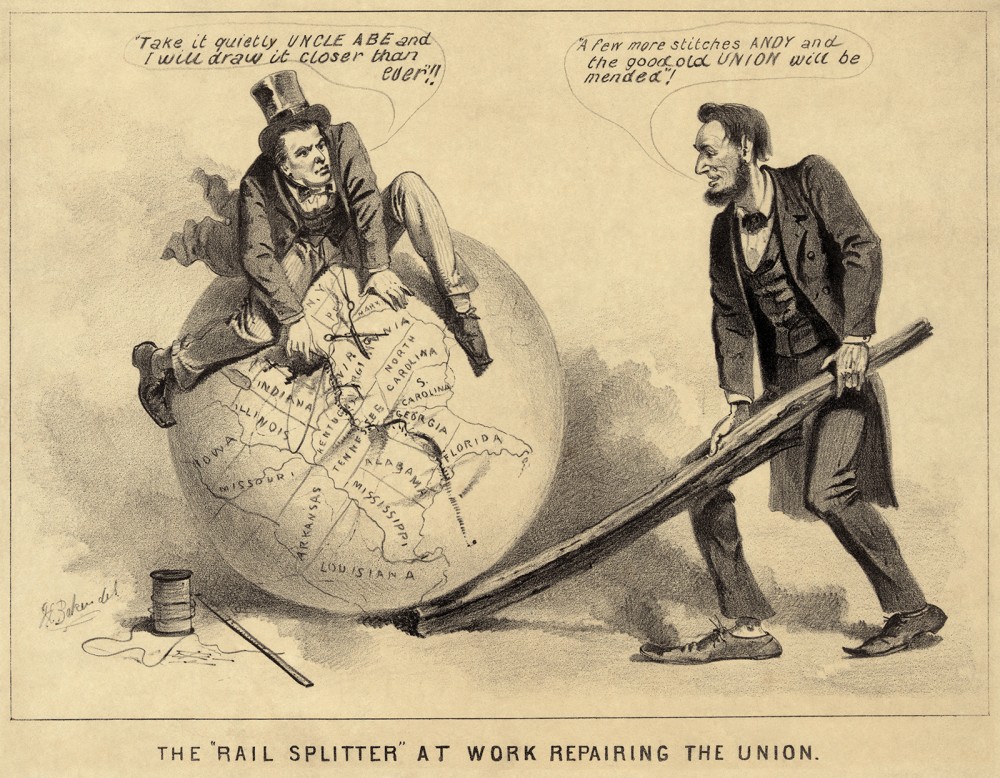 With the war coming to an end, the question of how to reunite the former Confederate states with the Union was a divisive one. Lincoln’s Presidential Reconstruction plans were seen by many, including Radical Republicans in Congress, to be too tolerant towards what they considered to be traitors. This political cartoon reflects this viewpoint, showing Lincoln and Johnson happily stitching the Union back together with little anger towards the South. Joseph E. Baker, “The ‘Rail Splitter’ at Work Repairing the Union,” 1865. Library of Congress.

Reconstruction—the effort to restore southern states to the Union and to redefine African Americans’ place in American society began before the Civil War ended. President Abraham Lincoln began planning for the reunification of the United States in the fall of 1863. With a sense that Union victory was imminent and that he could turn the tide of the war by stoking Unionist support in the Confederate states, Lincoln issued a proclamation allowing southerners to take an oath of allegiance. When just ten percent of a state’s voting population had taken such an oath, loyal Unionists could then establish governments. These so-called Lincoln governments sprang up in pockets where Union support existed like Louisiana, Tennessee, and Arkansas. Unsurprisingly, these were also the places that were exempted from the liberating effects of the Emancipation Proclamation.

Initially proposed as a war aim, Lincoln’s Emancipation Proclamation committed the United States to the abolishment of slavery. However, the Proclamation freed only slaves in areas of rebellion and left more than 700,000 in bondage in Delaware, Kentucky, Maryland, and Missouri as well as Union-occupied areas of Louisiana, Tennessee, and Virginia.

To cement the abolition of slavery, however, Congress passed the Thirteenth Amendment on January 31, 1865 and legally abolished slavery “except as a punishment for crime whereof the party shall have been duly convicted.” Section Two of the amendment granted Congress the “power to enforce this article by appropriate legislation.” State ratification followed, and by the end of the year the requisite three-fourths states had approved the amendment, and four million blacks were forever free.

Though Lincoln’s policy was lenient and conservative, the process of reconstruction was recast when Lincoln was shot on April 14, 1865 by John Wilkes Booth, while attending a performance of “Our American Cousin” at the Ford Theater. Treated rapidly and with all possible care, Lincoln succumbed to his wounds the following morning, leaving a somber pall over the North and among blacks that mourned the loss.

The assassination of Abraham Lincoln propelled Vice President Andrew Johnson into the executive office in April 1865. Johnson, a states’ rights, strict-constructionist and unapologetic racist from Tennessee, offered southern states a quick restoration into the Union. His Reconstruction plan required provisional southern governments to void their ordinances of secession, repudiate their confederate debts, and ratify the Thirteenth Amendment. On all other matters, the conventions could do what they wanted with no federal interference. In order to give the white yeoman population a chance to seize power, he pardoned all southerners engaged in the rebellion with the exception of wealthy planters who possessed more than $20,000 in property. The southern aristocracy would have to appeal to Johnson for individual pardons. To keep African Americans from stepping into the power vacuum, Johnson refused to grant them any rights beyond legal freedom.

Many of these southern governments enacted legislation that reestablished antebellum power relationships. South Carolina and Mississippi passed laws known as Black Codes to regulate black behavior and impose social and economic control. While they granted some rights to African Americans—like the right to own property, to marry or to make contracts—they also denied them fundamental rights. White lawmakers forbade black men from serving on juries or in state militias, refused to recognize black testimony against white people, apprenticed orphan children to their former masters, and established severe vagrancy laws. Mississippi’s vagrant law required all freedmen to carry papers proving they had means of employment. If they had no proof, they could be arrested and fined. If they could not pay the fine, the sheriff had the right to hire out his prisoner to “anyone who will paid the said tax.” Similar ambiguous vagrancy laws throughout the South reasserted control over black labor in what one scholar has called “slavery by another name.” Black codes effectively criminalized black leisure, limited their mobility, and locked many into exploitative farming contracts.

Republicans in Congress responded with a spate of legislation aimed at protecting freedmen and restructuring political relations in the South. Many Republicans were willing to tolerate racial equality in order to keep Johnson and his Reconstruction governments from re-establishing old patterns of exploitation and power. Some Republicans, like United States Congressman Thaddeus Stevens, did so because they truly believed in racial equality. But the majority understood that the only way to protect Republican interests in the South was to give the vote to the hundreds of thousands of black men, and most never supported anything more than legal equality. Republicans in Congress responded to the codes with the Civil Rights Act of 1866— the first federal attempt to constitutionally define all American-born residents (except Native peoples) as citizens and which prohibited any curtailment of citizens’ “fundamental rights.” Johnson vetoed the act, arguing that black people did not deserve the rights of citizenship. 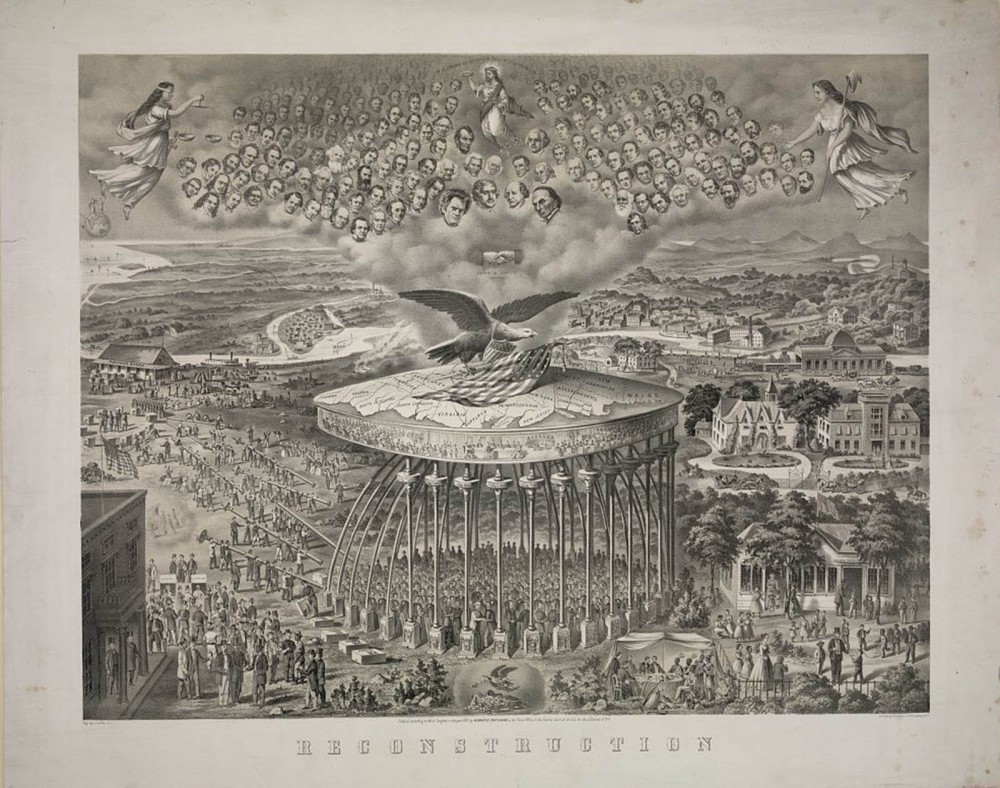 While no one could agree on what the best plan for reconstructing the nation would be, Americans understood the moment as critical and perhaps revolutionary. In this magnificent visual metaphor for the reconciliation of the North and South, John Lawrence postulates what might result from reunion. Reconstruction, the print seems to argue, will form a more perfect Union that upholds the ideals of the American Revolution, most importantly (as seen on a streaming banner near the top) that “All men are born free and equal.” John Giles Lawrence, “Reconstruction,” 1867. Library of Congress.

The Fourteenth Amendment developed concurrently with the Civil Rights Act to ensure its constitutionality. The House of Representatives approved the Fourteenth Amendment on June 13, 1866. Section One granted citizenship and repealed the Taney Court’s infamous Dred Scott (1857) decision. Moreover, it ensured that state laws could not deny due process or discriminate against particular groups of people. The Fourteenth Amendment signaled the federal government’s willingness to enforce the Bill of Rights over the authority of the states.

Based on his belief that African Americans did not deserve rights, President Johnson opposed the passage of the Fourteenth Amendment. With a two-thirds majority gained in the 1866 midterm elections, Republicans overrode the veto, and in 1867, they passed the first of two Reconstruction Acts, which dissolved state governments, divided the South into five military districts, and required states to ratify the Fourteenth Amendment, to write new constitutions enfranchising African Americans, and to abolish black codes before re-joining the Union. The Fourteenth Amendment was finally ratified on July 9, 1867.

By the eve of the 1868 Presidential Election, African Americans in most Southern states had been constitutionally enfranchised and had registered to vote. Former Union General Ulysses S. Grant ran on a platform of “Let Us Have Peace” in which he promised to protect the new status quo. On the other hand, the Democratic candidate, Horatio Seymour, promised to repeal Reconstruction. Not only would the revolutionary moment be over, but also he would actively undo anything the Radicals had accomplished. Black Southern voters ensured Grant’s victory and helped him win most of the former Confederacy. 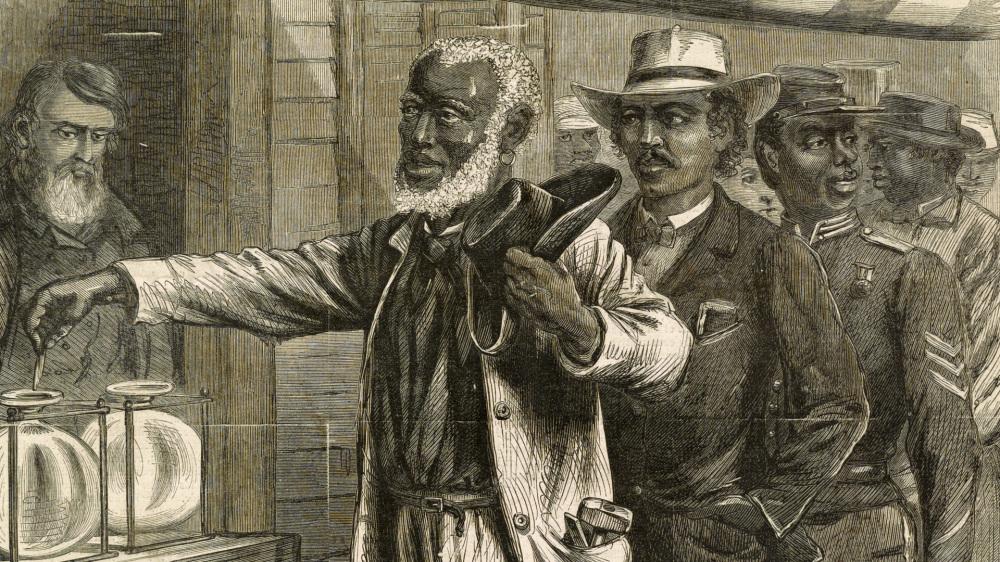 With the passage of the Fifteenth Amendment, droves of African American men went to the polls to exercise their newly recognized right to vote. In this Harper’s Weekly print, black men of various occupations wait patiently for their turn as the first voter submits his ballot. Unlike other contemporary images that depicted African Americans as ignorant, unkempt, and lazy, this print shows these black men as active citizens. Alfred R. Waud, “The First Vote,” November 1867. Library of Congress.

Black Americans began to participate in local, state and federal governance for the first time. In 1860, only five states in the North allowed African Americans to vote on equal terms with whites. Yet after 1867 when Congress ordered Southern states to eliminate racial discrimination in voting, African Americans began to win elections across the South. In a short time, the South was transformed from an all-white, pro-slavery, Democratic stronghold to a collection of Republican led states with African American’s in positions of power for the first time in American history.

Through the provisions of the Congressional Reconstruction Acts, black men voted in large numbers and also served as delegates to the state constitutional conventions in 1868. Black delegates actively participated in revising state constitutions. One of the most significant accomplishments of these conventions was the establishment of a public school system. While public schools were virtually nonexistent in the antebellum period, by the end of Reconstruction, every Southern state had established a public school system. Republican officials opened state institutions like mental asylums, hospitals, orphanages, and prisons to white and black residents, though often on a segregated basis. They actively sought industrial development, northern investment, and internal improvements. 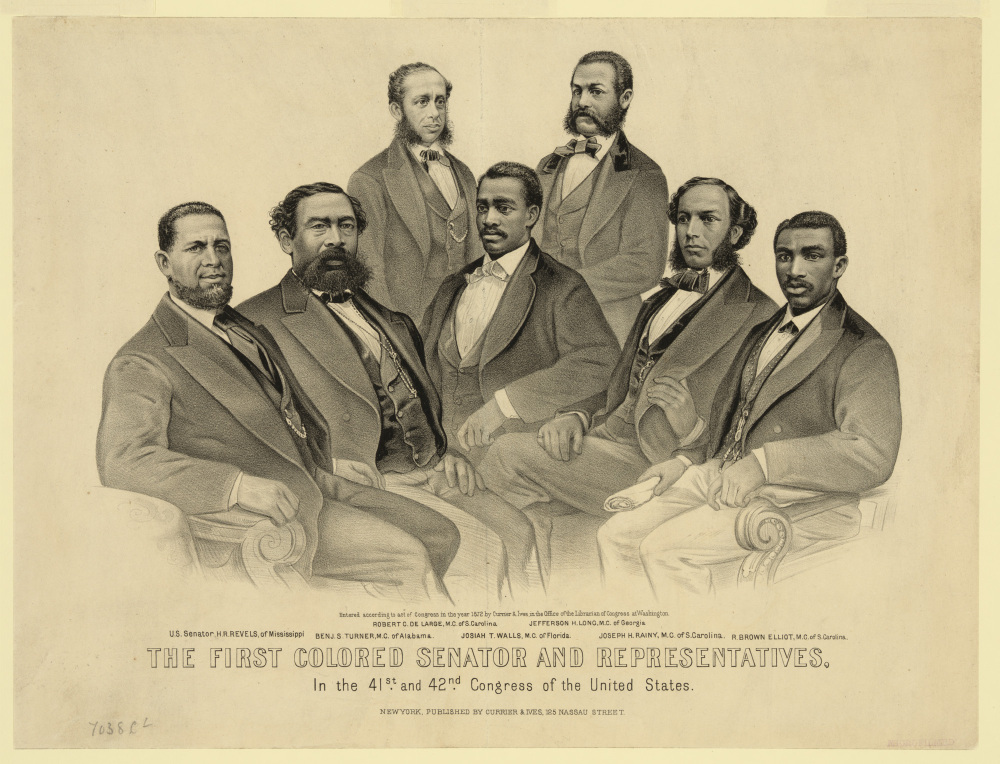 The era of Reconstruction witnessed a few moments of true progress. One of those was the election of African Americans to local, state, and national offices, including both houses of Congress. Pictured here are Hiram Revels (the first African American Senator) alongside six black representatives, all from the former Confederate states. Currier & Ives, “First Colored Senator and Representatives in the 41st and 42nd Congress of the United States," 1872. Library of Congress.

The African American office holders during Reconstruction came from diverse backgrounds. Many had been born free or had gained their freedom before the Civil War. Many free African Americans, particularly those in South Carolina, Virginia, and Louisiana, were wealthy and well educated, two facts that distinguished them from much of the white population both before and after the Civil War. Some like Antione Dubuclet of Louisiana and William Breedlove from Virginia owned slaves before the Civil War. Others had helped slaves escape or taught them to read like Georgia’s James D. Porter.

The majority of African American office holders, however, were slaves until sometime during the Civil War. Among them were skilled craftsman like Emanuel Fortune, a shoemaker from Florida, minsters such as James D. Lynch from Mississippi, and teachers like William V. Turner from Alabama served as public officials across the South. Moving into political office was a natural continuation of the leadership roles they had held in their former slave communities.