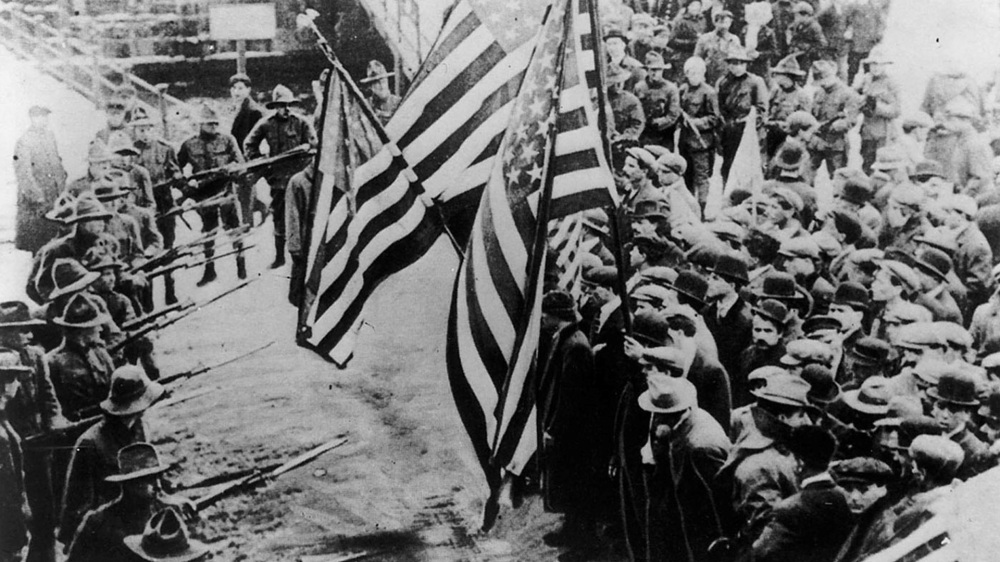 The ideas of social Darwinism attracted little support among the mass of American industrial laborers. American workers toiled in difficult jobs for long hours and little pay. Mechanization and mass production threw skilled laborers into unskilled positions. Industrial work ebbed and flowed with the economy. The typical industrial laborer could expect to be unemployed one month out of the year. They labored sixty hours a week and could still expect their annual income to fall below the poverty line. Among the working poor, wives and children were forced into the labor market to compensate. Crowded cities, meanwhile, failed to accommodate growing urban populations and skyrocketing rents trapped families in crowded slums.

Strikes ruptured American industry throughout the late-nineteenth and early-twentieth centuries. Workers seeking higher wages, shorter hours, and safer working conditions had struck throughout the antebellum era, but organized unions were fleeting and transitory. The Civil War and Reconstruction seemed to briefly distract the nation from the plight of labor, but the end of the sectional crisis and the explosive growth of big business, unprecedented fortunes, and a vast industrial workforce in the last quarter of the nineteenth century sparked the rise of a vast American labor movement.

The failure of the Great Railroad Strike of 1877 convinced workers of the need to organize. Union memberships began to climb. The Knights of Labor enjoyed considerable success in the early 1880s, due in part to its efforts to unite skilled and unskilled workers. It welcomed all laborers, including women (the Knights only barred lawyers, bankers, and liquor dealers). By 1886, the Knights had over 700,000 members. The Knights envisioned a cooperative producer-centered society that rewarded labor, not capital, but, despite their sweeping vision, the Knights focused on practical gains that could be won through the organization of workers into local unions. 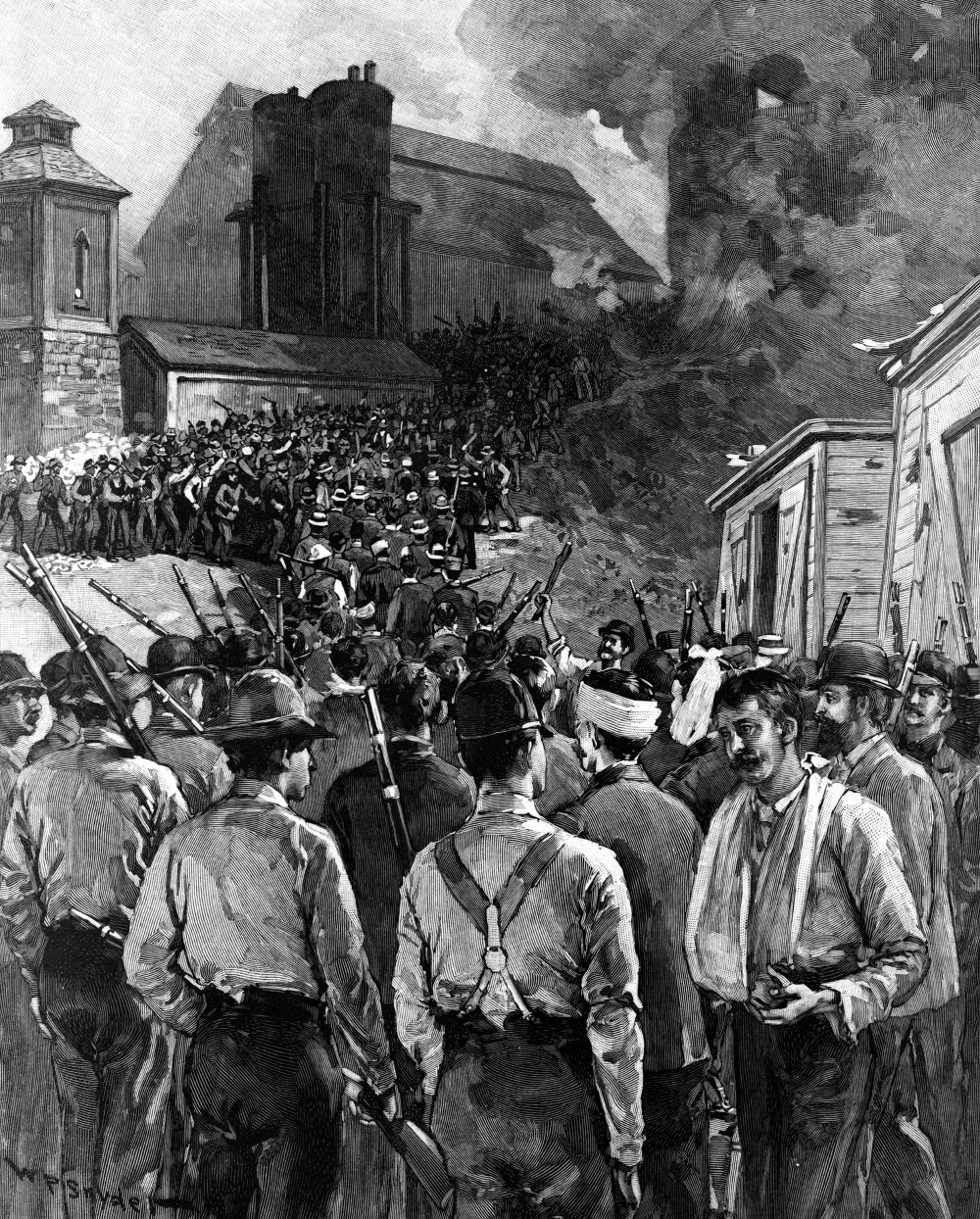 An 1892 cover of Harper’s Weekly depicting the Homestead Riot, showed Pinkerton men who had surrendered to the steel mill workers navigating a gauntlet of violent strikers. W.P. Synder (artist) after a photograph by Dabbs, “The Homestead Riot,” 1892. Library of Congress.

In Marshall, Texas, in the spring of 1886, one of Jay Gould’s rail companies fired a Knights of Labor member for attending a union meeting. His local union walked off the job and soon others joined. From Texas and Arkansas into Missouri, Kansas, and Illinois, nearly 200,000 workers struck against Gould’s rail lines. Gould hired strikebreakers and the Pinkerton Detective Agency, a kind of private security contractor, to suppress the strikes and get the rails moving again. Political leaders helped him and state militias were called in support of Gould’s companies. The Texas governor called out the Texas Rangers. Workers countered by destroying property, only winning them negative headlines and for many justifying the use of strikebreakers and militiamen. The strike broke, briefly undermining the Knights of Labor, but the organization regrouped and set its eyes on a national campaign for the eight-hour day.

In the summer 1886 the campaign for an eight-hour day, long a rallying cry that united American laborers, culminated in a national strike on May 1, 1886. Somewhere between 300,000 and 500,000 workers struck across the country. In Chicago, police forces killed several workers while breaking up protestors at the McCormick reaper works. Labor leaders and radicals called for a protest at Haymarket Square the following day, which police also proceeded to break up. But as they did, a bomb exploded and killed seven policemen. Police fired into the crowd, killing four. The deaths of the Chicago policemen sparked outrage across the nation and the sensationalization of the “Haymarket Riot” helped many Americans to associate unionism with radicalism. Eight Chicago anarchists were arrested and, despite direct evidence implicating them in the bombing, were charged and found guilty of conspiracy. Four were hanged (and one committed suicide before he could be). Membership in the Knights had peaked earlier that year, but fell rapidly after Haymarket: the group became associated with violence and radicalism. The national movement for an eight-hour day collapsed.

The American Federation of Labor (AFL) emerged as a conservative alternative to the vision of the Knights of Labor. An alliance of craft unions (unions composed of skilled workers), the AFL rejected the Knights’ expansive vision of a “producerist” economy and advocated “pure and simple trade unionism,” a program that aimed for practical gains (higher wages, fewer hours, and safer conditions) through a conservative approach that tried to avoid strikes. But workers continued to strike.

In 1892, the Amalgamated Association of Iron and Steel Workers struck at one of Carnegie’s steel mills in Homestead, Pennsylvania. After repeated wage cuts, workers shut the plant down and occupied the mill. The plant’s operator, Henry Clay Frick, immediately called in hundreds of Pinkerton detectives but the steel workers fought back. The Pinkertons tried to land by river and were besieged by the striking steel workers. After several hours of pitched battle, the Pinkertons surrendered, ran a bloody gauntlet of workers, and were kicked out of the mill grounds. But the Pennsylvania governor called the state militia, broke the strike, and reopened the mill. The union was essentially destroyed in the aftermath.

Still, despite repeated failure, strikes continued to roll across the industrial landscape. In 1894, workers in George Pullman’s “Pullman Car” factories struck when he cut wages by a quarter but kept rents and utilities in his company town constant. The American Railway Union (ARU), led by Eugene Debs, launched a sympathy strike: the ARU would refuse to handle any Pullman cars on any rail line anywhere in the country. Thousands of workers struck and national railroad traffic ground to a halt. Unlike nearly every other major strike, the governor of Illinois sympathized with workers and refused to dispatch the state militia. It didn’t matter. In July, President Grover Cleveland dispatched thousands of American soldiers to break the strike and a federal court had issued a preemptive injunction against Debs and the union’s leadership. The strike violated the injunction, and Debs was arrested and imprisoned. The strike evaporated without its leadership. Jail radicalized Debs, proving to him that political and judicial leaders were merely tools for capital in its struggle against labor.

The degrading conditions of industrial labor sparked strikes across the country. The final two decades of the nineteenth century saw over 20,000 strikes and lockouts in the United States. Industrial laborers struggled to carve for themselves a piece of the prosperity lifting investors and a rapidly expanding middle class into unprecedented standards of living. But workers were not the only ones struggling to stay afloat in industrial America. Americans farmers also lashed out against the inequalities of the Gilded Age and denounced political corruption for enabling economic theft. 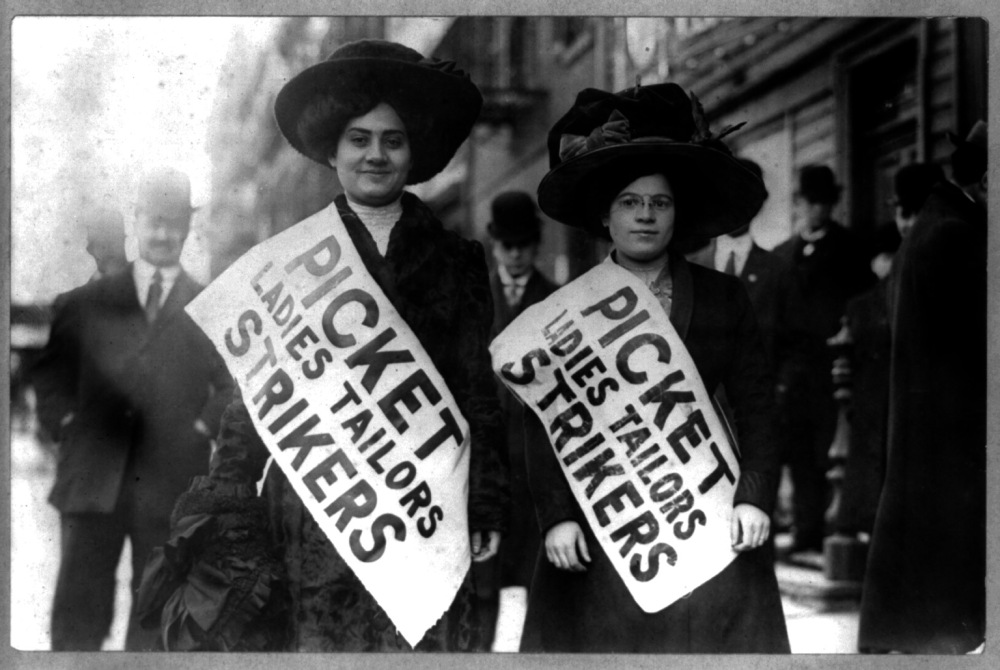 Two women strikers on picket line during the "Uprising of the 20,000," garment workers strike, New York City, 1910. Library of Congress.

US History 1 Unit 4 Challenge 1 The Predicament of Slavery 3.PNG

The Growth of the Labor Movement.odt