The Rise of the Right

If the conservative movement recovered lost ground on the field on gender and sexual politics, it captured the battlefield on American foreign policy in the 1980s­—­for a time, at least. Ronald Reagan entered office a committed Cold Warrior. He held the Soviet Union in contempt, denouncing it in a 1983 speech as an “evil empire.” And he never doubted that the Soviet Union would end up “on the ash heap of history,” as he said in a 1982 speech to the British Parliament. Indeed, Reagan believed it was the duty of the United States to speed the Soviet Union to its inevitable demise. His “Reagan Doctrine” declared that the United States would supply aid to anti-communist forces everywhere in the world. To give this doctrine force, Reagan oversaw an enormous expansion in the defense budget. Federal spending on defense rose from $171 billion in 1981 to $229 billion in 1985, the highest level since the Vietnam War. He described this as a policy of “peace through strength,” a phrase that appealed to Americans who, during the 1970s, feared that the United States was losing its status as the world’s most powerful nation. Yet the irony is that Reagan, for all his militarism, helped bring the Cold War to an end. He achieved it not through nuclear weapons but through negotiation, a tactic he had once scorned.

Reagan’s election came at a time when many Americans feared their country was in an irreversible decline. American forces withdrew in disarray from South Vietnam in 1975. The United States returned control of the Panama Canal to Panama in 1978, despite protests from conservatives. Pro-American dictators were toppled in Iran and Nicaragua in 1979. The Soviet Union invaded Afghanistan that same year, leading conservatives to warn about American weakness in the face of Soviet expansion. Such warnings were commonplace in the 1970s. “Team B,” a group of intellectuals commissioned by the CIA to examine Soviet capabilities, released a report in 1976 stating that “all evidence points to an undeviating Soviet commitment to…global Soviet hegemony.” The Committee on the Present Danger, an organization of conservative foreign policy experts, issued similar statements. When Reagan warned, as he did in 1976, that “this nation has become Number Two in a world where it is dangerous—if not fatal—to be second best,” he was speaking to these fears of decline. 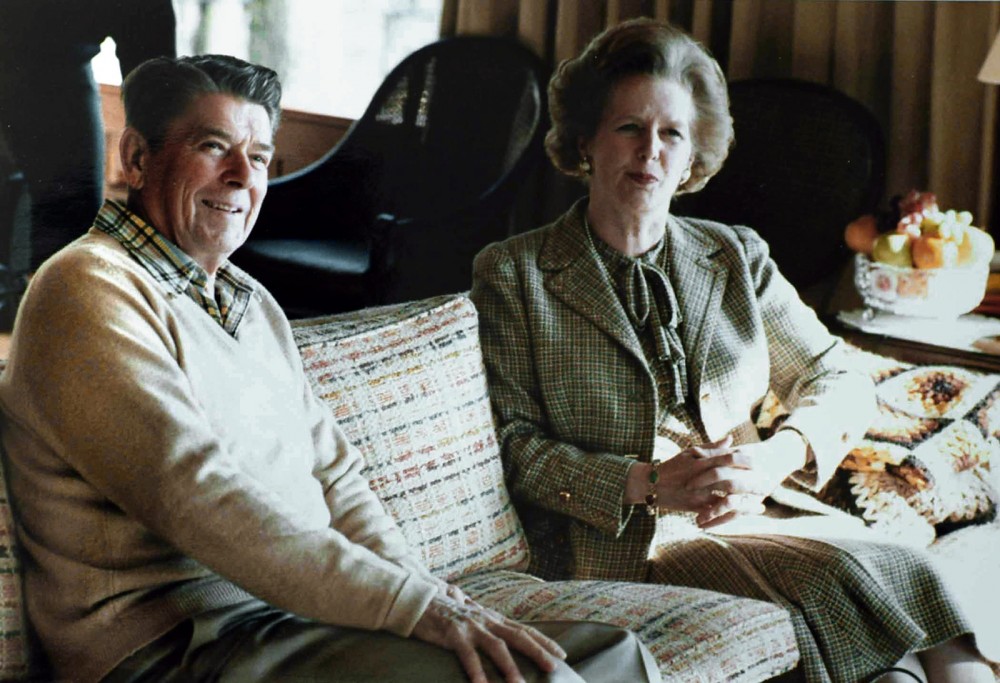 The Reagan administration made Latin America a showcase for its newly assertive policies. Jimmy Carter had sought to promote human rights in the region, but Reagan and his advisers scrapped this approach and instead focused on fighting communism—a term they applied to all Latin American left-wing movements. Reagan justified American intervention by pointing out Latin America’s proximity to the United States: “San Salvador [in El Salvador] is closer to Houston, Texas, than Houston is to Washington, DC,” he said in one speech, adding, “Central America isAmerica.” And so when communists with ties to Cuba overthrew the government of the Caribbean nation of Grenada in October 1983, Reagan dispatched the United States Marines to the island. Dubbed “Operation Urgent Fury,” the Grenada invasion overthrew the leftist government after less than a week of fighting. Despite the relatively minor nature of the mission, its success gave victory-hungry Americans something to cheer about after the military debacles of the previous two decades. 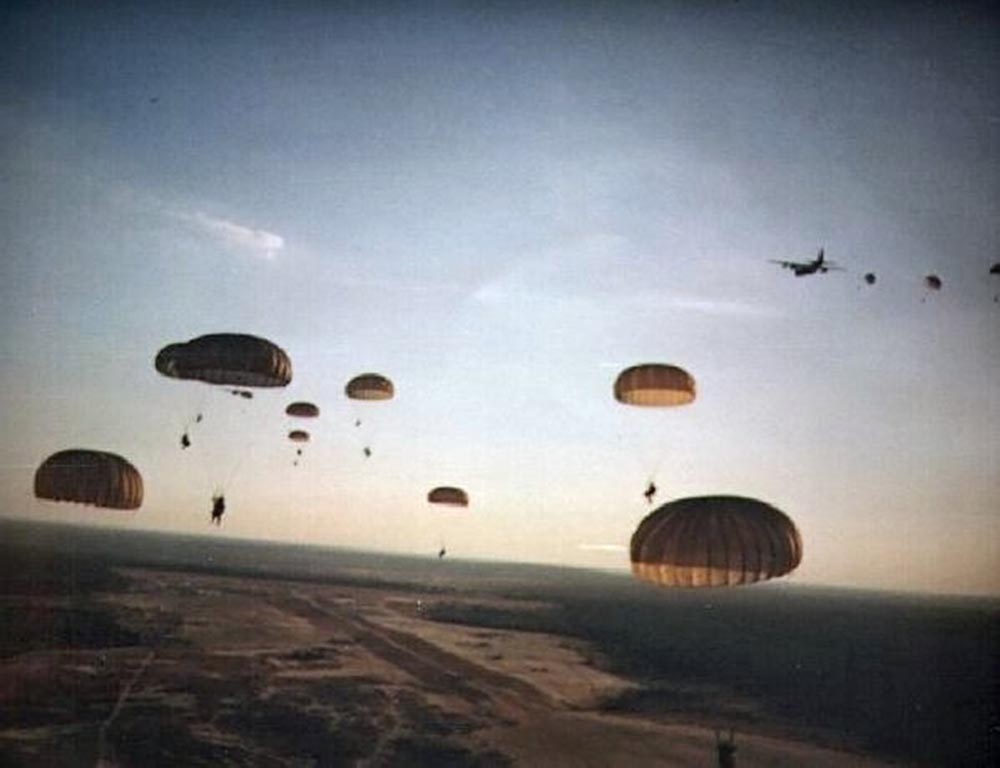 Operation Urgent Fury, which the U.S. invasion of Grenada came to be called, was broadly supported by the U.S. public, even though it was violation of international law. This support was in large part due to incorrect intelligence disseminated by the U.S. government. This photograph shows the deployment of U.S. Army Rangers into Grenada. Photograph, October 25, 1983. Wikimedia.

Grenada was the only time Reagan deployed the American military in Latin America, but the United States also influenced the region by supporting right-wing, anti-communist movements there. From 1981 to 1990, the United States gave more than $4 billion to the government of El Salvador in a largely futile effort to defeat the guerillas of the Farabundo Martí National Liberation Front (FMLN). Salvadoran security forces equipped with American weapons committed numerous atrocities, including the slaughter of almost 1,000 civilians at the village of El Mozote in December 1981. The United States also supported the contras, a right-wing insurgency fighting the leftist Sandinista government in Nicaragua. Reagan, overlooking the contras’ brutal tactics, hailed them as the “moral equivalent of the Founding Fathers.”

The Reagan administration took a more cautious approach in the Middle East, where its policy was determined by a mix of anti-communism and hostility to the Islamic government of Iran. When Iraq invaded Iran in 1980, the United States supplied Iraqi dictator Saddam Hussein with military intelligence and business credits—even after it became clear that Iraqi forces were using chemical weapons. Reagan’s greatest setback in the Middle East came in 1982, when, shortly after Israel invaded Lebanon, he dispatched Marines to the Lebanese city of Beirut to serve as a peacekeeping force. On October 23, 1983, a suicide bomber killed 241 Marines stationed in Beirut. Congressional pressure and anger from the American public forced Reagan to recall the Marines from Lebanon in March 1984. Reagan’s decision demonstrated that, for all his talk of restoring American power, he took a pragmatic approach to foreign policy. He was unwilling to risk another Vietnam by committing American troops to Lebanon.

Though Reagan’s policies toward Central America and the Middle East aroused protest, it was his policy on nuclear weapons that generated the most controversy. Initially Reagan followed the examples of presidents Nixon, Ford, and Carter by pursuing arms limitation talks with the Soviet Union. American officials participated in the Intermediate-range Nuclear Force Talks (INF) that began in 1981 and Strategic Arms Reduction Talks (START) in 1982. But the breakdown of these talks in 1983 led Reagan to proceed with plans to place Pershing II nuclear missiles in Western Europe to counter Soviet SS-20 missiles in Eastern Europe. Reagan went a step further in March 1983, when he announced plans for a “Strategic Defense Initiative,” a space-based system that could shoot down incoming Soviet missiles. Critics derided the program as a “Star Wars” fantasy, and even Reagan’s advisors harbored doubts. “We don’t have the technology to say this,” Secretary of State George Shultz told aides. These aggressive policies fed a growing “nuclear freeze” movement throughout the world. In the United States, organizations like the Committee for a Sane Nuclear Policy organized protests that culminated in a June 1982 rally that drew almost a million people to New York City’s Central Park. 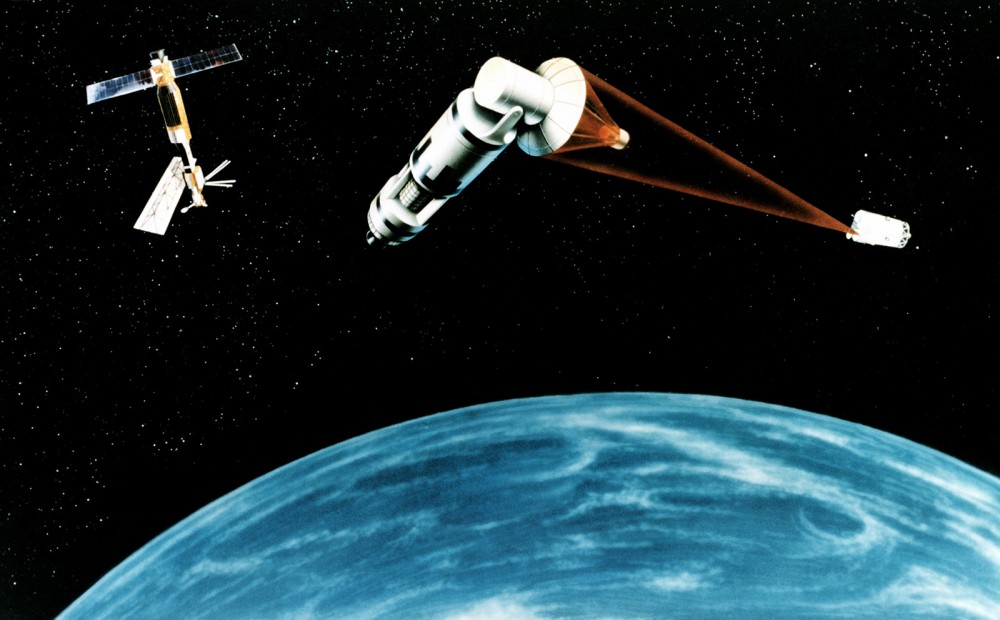 President Reagan proposed space- and ground-based systems to protect the United States from nuclear missiles in his 1984 Strategic Defense Initiative (SDI). Scientists argued it was unrealistic or impossible with contemporary technology, and it was lambasted in the media as “Star Wars.” Indeed, as this artist's representation of SDI shows, it was rather ridiculous. Created October 18, 1984. Wikimedia.

Protests in the streets were echoed by opposition in Congress. Congressional Democrats opposed Reagan’s policies on the merits; congressional Republicans, though they supported Reagan’s anti-communism, were wary of the administration’s fondness for circumventing Congress. In 1982 the House voted 411-0 to approve the Boland Amendment, which barred the United States from supplying funds to overthrow Nicaragua’s Sandinista government. A second Boland Amendment in 1984 prohibited any funding for the anti-Sandinista contra movement. The Reagan administration’s determination to flout these amendments led to a scandal that almost destroyed Reagan’s presidency. Robert MacFarlane, the president’s National Security Advisor, and Oliver North, a member of the National Security Council, raised money to support the contras by selling American missiles to Iran and funneling the money to Nicaragua. When their scheme was revealed in 1986, it was hugely embarrassing for Reagan. The president’s underlings had not only violated the Boland Amendments but had also, by selling arms to Iran, made a mockery of Reagan’s declaration that “America will never make concessions to the terrorists.” But while the Iran-Contra affair generated comparisons to the Watergate scandal, investigators were never able to prove Reagan knew about the operation. Without such a “smoking gun,” talk of impeaching Reagan remained talk.

Though the Iran-Contra scandal tarnished the Reagan administration’s image, it did not derail Reagan’s most significant achievement: easing tensions with the Soviet Union. This would have seemed impossible in Reagan’s first term, when the president exchanged harsh words with a succession of Soviet leaders—Leonid Brezhnev, Yuri Andropov, and Konstantin Chernenko. In 1985, however, Chernenko’s death handed leadership of the Soviet Union to Mikhail Gorbachev. Gorbachev, a true believer in socialism, nonetheless realized that the Soviet Union desperately needed reform. He instituted a program of perestroika, which referred to the restructuring of the Soviet system, and of glasnost, which meant greater transparency in government. Gorbachev also reached out to Reagan in hopes of negotiating an end the arms race that was bankrupting the Soviet Union. Reagan and Gorbachev met in Geneva, Switzerland in 1985 and Reykjavik, Iceland in 1986, where, although they could not agree on anything concrete—thanks to Reagan’s refusal to limit the Strategic Defense Initiative—they developed a rapprochement unprecedented in the history of US-Soviet relations. This trust made possible the Intermediate Nuclear Forces Treaty of 1987, which committed both sides to a sharp reduction in their nuclear arsenal.

By the late 1980s the Soviet empire was crumbling. Some credit must go to Reagan, who successfully combined anti-communist rhetoric—such as his 1987 speech at the Berlin Wall, where he declared, “General Secretary Gorbachev, if you seek peace…tear down this wall!”—with a willingness to negotiate with Soviet leadership. But the real causes of collapse lay within the Soviet empire itself. Soviet-allied governments in Eastern Europe tottered under pressure from dissident organizations like Poland’s Solidarity and East Germany’s Neues Forum; some of these countries were also pressured from within by the Roman Catholic Church, which had turned toward active anti-communism under Pope John Paul II. When Gorbachev made it clear that he would not send the Soviet military to prop up these regimes, they collapsed one by one in 1989—in Poland, Hungary, Czechoslovakia, Romania, Bulgaria, and East Germany. Within the Soviet Union, Gorbachev’s proposed reforms, rather than bring stability, instead unraveled the decaying Soviet system. By 1991 the Soviet Union itself had vanished, dissolving into a “Commonwealth of Independent States.”

US History I Milestone 3.docx

US History I Milestone 2.docx

US History I Unit 4 Challenge 3.docx