The Origins of the European War

Across the globe in Europe, the continent’s major powers were still struggling with the after-effects of the First World War when the global economic crisis spiraled much of the continent into chaos. Germany’s Weimer Republic collapsed with the economy and out of the ashes emerged Adolph Hitler’s National Socialists—the Nazis. Championing German racial supremacy, fascist government, and military expansionism, Adolph Hitler rose to power and, after aborted attempts to take power in Germany, became Chancellor in 1933 and the Nazis conquered German institutions. Democratic traditions were smashed. Leftist groups were purged. Hitler repudiated the punitive damages and strict military limitations of the Treaty of Versailles. He rebuilt the German military and navy. He reoccupied regions lost during the war and re-militarized the Rhineland, along the border with France. When the Spanish Civil War broke out in 1936, Hitler and Mussolini—the fascist Italian leader who had risen to power in the 1920s—intervened for the Spanish fascists, toppling the communist Spanish Republican Party. Britain and France stood by warily and began to rebuild their militaries, anxious in the face of a renewed Germany but still unwilling to draw Europe into another bloody war.

In his autobiographical manifesto, Mein Kampf, Hitler advocated for the unification of Europe’s German peoples under one nation and that nation’s need for lebensraum, or living space, particularly in Eastern Europe, to supply Germans with the land and resources needed for future prosperity. The untermenschen (“lesser” humans) would have to go. Once in power, Hitler worked toward the twin goals of unification and expansion. 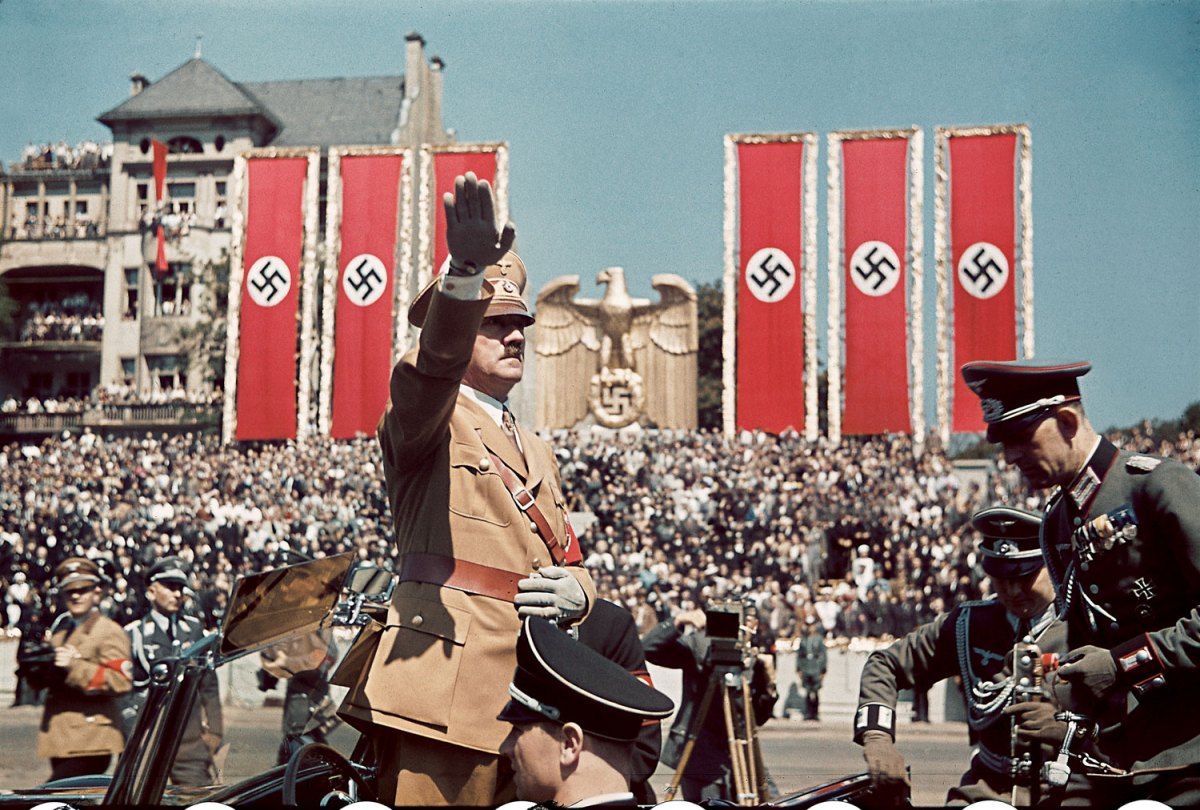 "Adolf Hitler salutes troops of the Condor Legion who fought alongside Spanish Nationalists in the Spanish Civil War, during a rally upon their return to Germany, 1939." Hugo Jaeger—Time & Life Pictures/Getty Images. 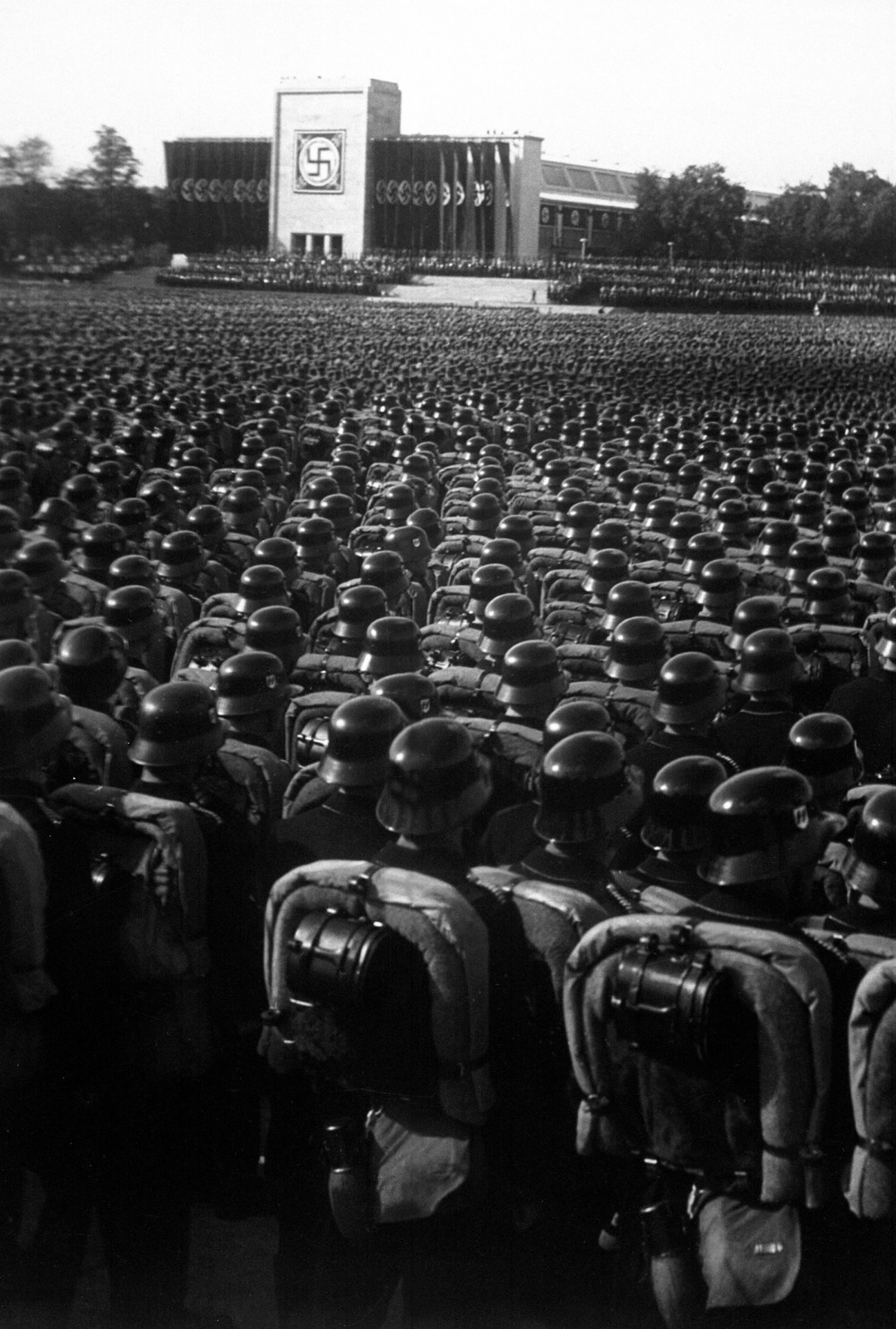 Huge rallies like this one in Nuremberg displayed the sheer number of armed and ready troop and instilled a fierce loyalty to (or fearful silence about) Hitler and the National Socialist Party in Germany. Photograph, November, 9. 1935. Wikimedia.

In 1938 Germany annexed Austria and set its sights on the Sudetenland, a large, ethnically German area of Czechoslovakia. Britain and France, alarmed but still anxious to avoid war, the major powers agreed—without Czechoslovakia’s input—that Germany could annex the region in return for a promise to stop all future German aggression. It was thought that Hitler could be appeased, but it became clear that his ambitions would continue pushing German expansion. In March 1939, Hitler took the rest of Czechoslovakia and began to make demands on Poland. Britain and France promised war. And war came.

Hitler signed a secret agreement—the Molotov–Ribbentrop Pact—with the Soviet Union that coordinated the splitting of Poland between the two powers and promised non-aggression thereafter. The European war began when the German Wehrmacht invaded Poland on September 1st, 1939. Britain and France declared war two days later and mobilized their armies. Britain and France hoped that the Poles could hold out for three to four months, enough time for the Allies to intervene. Poland fell in three weeks. The German army, anxious to avoid the rigid, grinding war of attrition that took so many millions in the stalemate of WWI, built their new modern army for speed and maneuverability. German doctrine emphasized the use of tanks, planes, and motorized infantry (infantry that used trucks for transportation instead of marching) to concentrate forces, smash front lines, and wreak havoc behind the enemy’s defenses. It was called blitzkrieg, or lightening war.

After the fall of Poland, France and its British allies braced for an inevitable German attack. Throughout the winter of 1939-40, however, fighting was mostly confined to smaller fronts in Norway. Belligerents called it the Sitzkrieg (sitting war). But in May 1940, Hitler launched his attack into Western Europe. Mirroring the German’s Schlieffen Plan of 1914 in the previous war, Germany attacked through the Netherlands and Belgium to avoid the prepared French defenses along the French-German border. Poland had fallen in three weeks; France lasted only a few weeks more. By June, Hitler was posing for photographs in front of the Eiffel Tower. Germany split France in half. Germany occupied and governed the north, and the south would be ruled under a puppet government in Vichy.

With France under heel, Hitler turned to Britain. Operation Sea Lion—the planned German invasion of the British Isles—required air superiority over the English Channel. From June until October the German Luftwaffe fought the Royal Air Force (RAF) for control of the skies. Despite having fewer planes, British pilots won the so-called Battle of Britain, saving the islands from immediate invasion and prompting the new Prime Minister, Winston Churchill, to declare, “never before in the field of human conflict has so much been owed by so many to so few.” 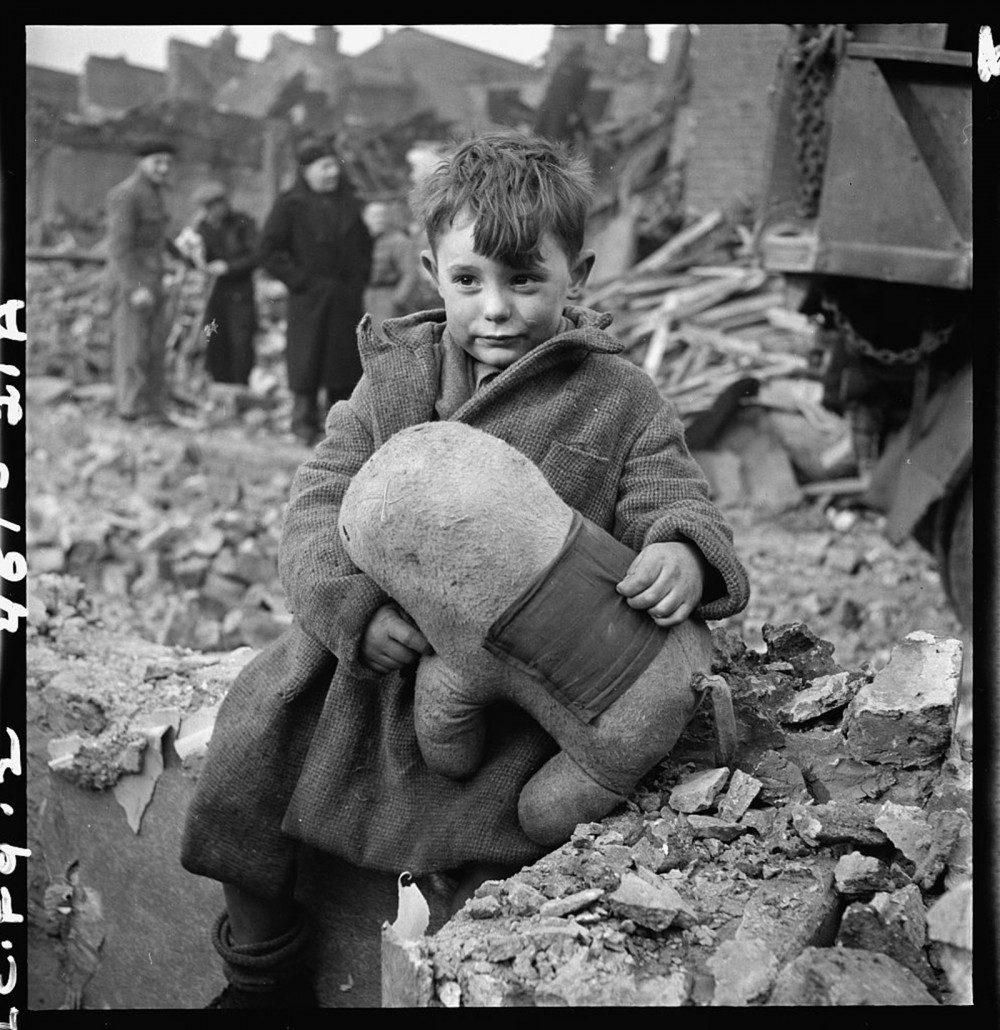 The German aerial bombing of London left thousands homeless, hurt, or dead. This child sits among the rubble with a rather quizzical look on his face, as adults ponder their fate in the background. Toni Frissell, “[Abandoned boy holding a stuffed toy animal amid ruins following German aerial bombing of London],” 1945. Library of Congress.
If Britain was safe from invasion, it was not immune from further air attacks. Stymied in the Battle of Britain, Hitler began the Blitz—a terror bombing campaign targeting cities and civilians. Hoping to crush the British will to fight, the Luftwaffe bombed the cities of London, Liverpool, and Manchester every night from September until the following May. Children were sent far into the countryside to live with strangers to shield them from the bombings. Remaining residents took refuge in shelters and subway tunnels, emerging each morning to put out fires and bury the dead.The Blitz came to an end in June 1941, when Hitler, confident that Britain was temporarily out of the fight, turned his attention to Operation Barbarossa—the invasion of the Soviet Union. Hoping to capture vast agricultural lands, seize numerous oil fields, and break the military threat of Stalin’s Soviet Union, Hitler broke the two powers’ 1939 non-aggression pact and, on June 22, invaded the Soviet Union. It was the largest land invasion in history.France and Poland had fallen in weeks, and German officials hoped to break Russia before the winter. And initially, the blitzkrieg worked. The German military quickly conquered enormous swaths of land and netted hundreds of thousands of prisoners. But Russia was too big and the Soviets were willing to sacrifice millions to stop by the fascist advance. After recovering from the initial shock of the German invasion, Stalin moved his factories east of the Urals, out of range of the Luftwaffe. He ordered his retreating army to adopt a “scorched earth” policy, to move east and destroy food, rails, and shelters to stymie the advancing German army. The German Army slogged forward. It split into three pieces and stood at the gates of Moscow, Stalingrad and Leningrad, but supply lines were now thousands of miles away, Soviet infrastructure had been destroyed, partisans harried the German lines, and the brutal Russian winter arrived. Germany had won massive gains but the winter found Germany exhausted and overextended. In the north, the German Army starved Leningrad to death during an interminable siege; in the south, at Stalingrad, the two armies bled themselves to death in the destroyed city; and, in the center, on the outskirts of Moscow, in sight of the capital city, the German army faltered and fell back.It was the Soviet Union broke Hitler’s army. Twenty-five million Soviet soldiers and civilians died during the “The Great Patriotic War” and roughly 80% of all German casualties in the war came on the Eastern Front. The German army and its various conscripts suffered 850,000 casualties at the Battle of Stalingrad alone. In December 1941, Germany began its long retreat.

The Origins of Revolutionary Thought.docx

The origins of the Industrial Revolution, and its Impacts on British and European Societies.doc

The origins of European union. UPDATE.docx

1.5.4 Tony Judt - Britain and the origins of the European Union.docx

12: The Origins of the Cold War

Reading Notes on the Origins of the Cold War in Europe

Origins of the cold war.docx

Essay on the Origins of the Cold War in Europe

Reading Notes on the Origins of the Cold War in Europe

US History I Milestone 1.docx