The Origins of the Great Depression 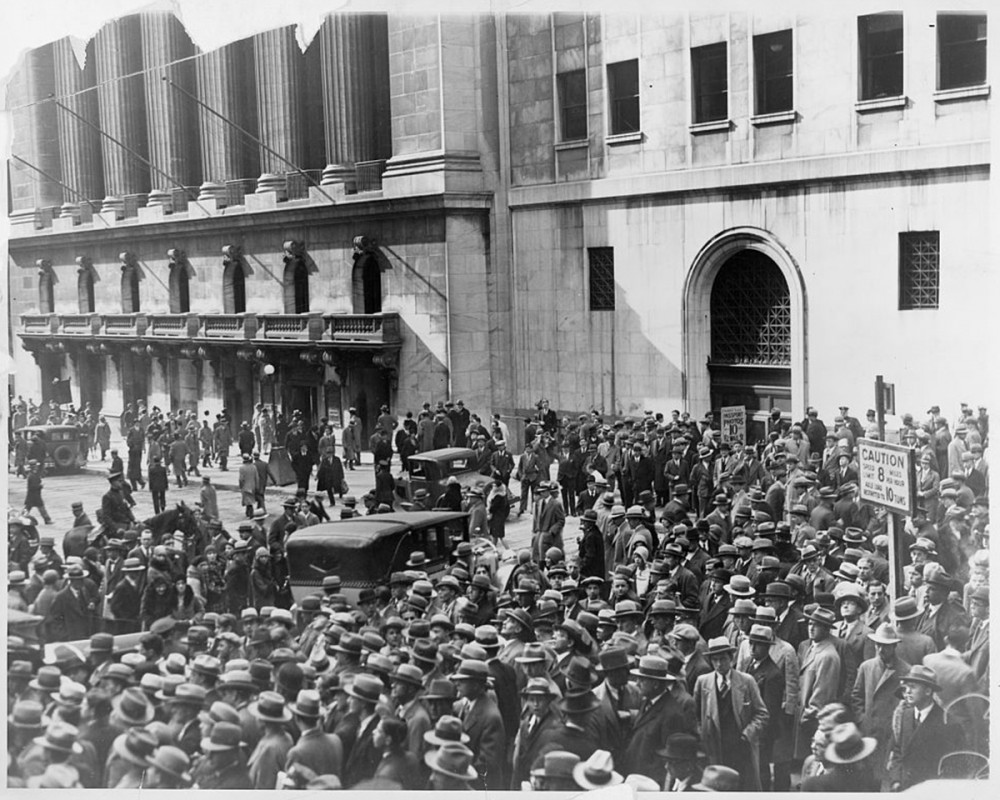 “Crowd of people gather outside the New York Stock Exchange following the Crash of 1929,” 1929. Library of Congress.

On Thursday, October 24, 1929, stock market prices suddenly plummeted. Ten billion dollars in investments (roughly equivalent to about $100 billion today) disappeared in a matter of hours. Panicked selling set in, stock sunk to record lows, and stunned investors crowded the New York Stock Exchange demanding answers. Leading bankers met privately at the offices of J.P. Morgan and raised millions in personal and institutional contributions to halt the slide. They marched across the street and ceremoniously bought stocks at inflated prices. The market temporarily stabilized, but fears spread over the weekend, and the following week frightened investors dumped their portfolios to avoid further losses. On October 29, “Black Tuesday,” the stock market began its long precipitous fall. Stock values evaporated. Shares of U.S. Steel dropped from $262 to $22. General Motors’ stock fell from $73 a share to $8. Four-fifths of the J.D. Rockefeller’s fortune—the greatest in American history—vanished.

Although the Crash stunned the nation, it exposed the deeper, underlying problems with the American economy in the 1920s. The stock market’s popularity grew throughout the 1920s, but only 2.5% of Americans had brokerage accounts; the overwhelming majority of Americans had no direct personal stake in Wall Street. The stock market’s collapse, no matter how dramatic, did not by itself depress the American economy. Instead, the Crash exposed a great number of factors which, when combined with the financial panic, sunk the American economy into the greatest of all economic crises. Rising inequality, declining demand, rural collapse, overextended investors, and the bursting of speculative bubbles all conspired to plunge the nation into the Great Depression.

Despite progressive resistance, the vast gap between rich and poor accelerated throughout the early-twentieth century. In the aggregate, Americans in 1929 were better off than in previous years. Per capita income rose 10% for all Americans, but 75% for the nation’s wealthiest citizens. The return of conservative politics in the 1920s reinforced federal fiscal policies that exacerbated the divide: low corporate and personal taxes, easy credit, and depressed interest rates overwhelmingly favored wealthy investors who, flush with cash, spent their money on luxury goods and speculative investments in the rapidly rising stock market.

The pro-business policies of the 1920s were designed for an American economy built upon the production and consumption of durable goods. Yet, by the late 1920s, much of the market was saturated. The boom of automobile manufacturing, the great driver of the American economy in the 1920s, slowed as fewer and fewer Americans with the means to purchase a car had not already done so. More and more, the well-to-do had no need for the new automobiles, radios, and other consumer goods that fueled GDP growth in the 1920s. When products failed to sell, inventories piled up, manufacturers scaled back production, and companies fired workers, stripping potential consumers of cash, blunting demand for consumer goods, and replicating the downward economic cycle. The situation was only compounded by increased automation and rising efficiency in American factories. Despite impressive overall growth throughout the 1920s, unemployment hovered around 7% throughout the decade, suppressing purchasing power for a great swath of potential consumers. 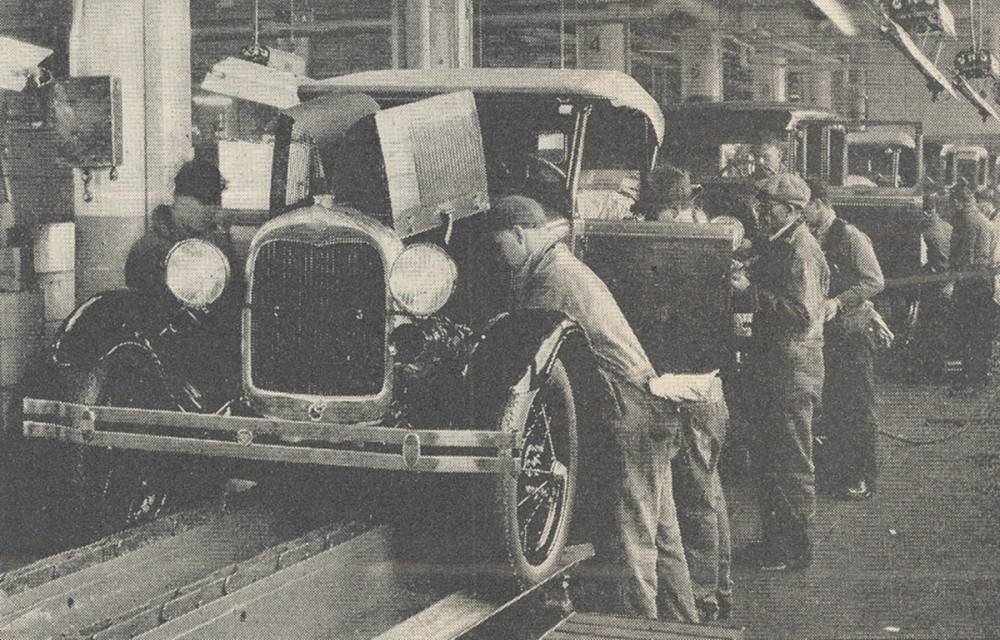 While a manufacturing innovation, Henry Ford’s assembly line produced so many cars as to flood the automobile market in the 1920s. Interview with Henry Ford, Literary Digest, January 7, 1928. Wikimedia.

For American farmers, meanwhile, “hard times” began long before the markets crashed. In 1920 and 1921, after several years of larger-than-average profits, farm prices in the South and West continued their long decline, plummeting as production climbed and domestic and international demand for cotton, foodstuffs, and other agricultural products stalled. Widespread soil exhaustion on western farms only compounded the problem. Farmers found themselves unable to make payments on loans taken out during the good years, and banks in agricultural areas tightened credit in response. By 1929, farm families were overextended, in no shape to make up for declining consumption, and in a precarious economic position even before the Depression wrecked the global economy.

Despite serious foundational problems in the industrial and agricultural economy, most Americans in 1929 and 1930 still believed the economy would bounce back. In 1930, amid one the Depression’s many false hopes, President Herbert Hoover reassured an audience that “the depression is over.” But the president was not simply guilty of false optimism. Hoover made many mistakes. During his 1928 election campaign, Hoover promoted higher tariffs as a means for encouraging domestic consumption and protecting American farmers from foreign competition. Spurred by the ongoing agricultural depression, Hoover signed into law the highest tariff in American history, the Smoot-Hawley Tariff of 1930, just as global markets began to crumble. Other countries responded in kind, tariff walls rose across the globe, and international trade ground to a halt. Between 1929 and 1932, international trade dropped from $36 billion to only $12 billion. American exports fell by 78%. Combined with overproduction and declining domestic consumption, the tariff exacerbated the world’s economic collapse.

But beyond structural flaws, speculative bubbles, and destructive protectionism, the final contributing element of the Great Depression was a quintessentially human one: panic. The frantic reaction to the market’s fall aggravated the economy’s other many failings. More economic policies backfired. The Federal Reserve overcorrected in their response to speculation by raising interest rates and tightening credit. Across the country, banks denied loans and called in debts. Their patrons, afraid that reactionary policies meant further financial trouble, rushed to withdraw money before institutions could close their doors, ensuring their fate. Such bank runs were not uncommon in the 1920s, but, in 1930, with the economy worsening and panic from the crash accelerating, 1,352 banks failed. In 1932, nearly 2,300 banks collapsed, taking personal deposits, savings, and credit with them.

The Great Depression was the confluence of many problems, most of which had begun during a time of unprecedented economic growth. Fiscal policies of the Republican “business presidents” undoubtedly widened the gap between rich and poor and fostered a “stand-off” over international trade, but such policies were widely popular and, for much of the decade, widely seen as a source of the decade’s explosive growth. With fortunes to be won and standards of living to maintain, few Americans had the foresight or wherewithal to repudiate an age of easy credit, rampant consumerism, and wild speculation. Instead, as the Depression worked its way across the United States, Americans hoped to weather the economic storm as best they could, waiting for some form of relief, any answer to the ever-mounting economic collapse that strangled so many Americans’ lives.

Copy of America during the Great Depression Viewing Guide.pdf

Barber - On the Origins of the Great Depression.pdf

The Great Depression | THE AMERICAN YAWP.pdf

6 The Great Depression did not originate in the US, cuases in Europe and President Hoover&#x27;s response

Mexico during and after the Great Depression.pptx