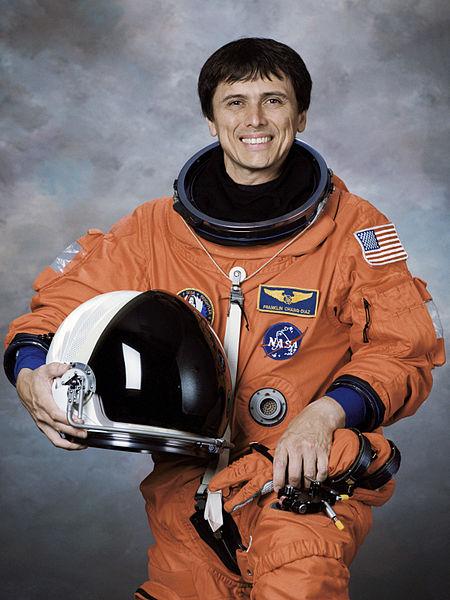 (1) Franklin Ramón Chang Díaz is a veteran of seven Space Shuttle missions, making him a shared record holder for the highest number of spaceflights. (2) Chang Díaz was born in San José, Costa Rica, on April 5, 1950, to Ramón Ángel Chang Morales and María Eugenia Díaz Romero. (3) He attended school in Costa Rica until 1967 when he moved to the United States to finish his high school education. (4) The University of Connecticut, where a Bachelor of Science in mechanical engineering was earned in 1973, and Massachusetts Institute of Technology, where a Doctor of Science in applied plasma physics was earned in 1977, were attended by Chang Díaz.

(5) Chang Díaz was selected as an astronaut candidate by NASA in 1980, and he first flew aboard Space Shuttle mission STS-61-C in 1986. (6) He went on six other missions between 1989 and 2002. (7) During his final mission, three spacewalks with Philippe Perrin as part of the construction of the International Space Station were performed by Chang Díaz. (8) He then worked as the director of the Advanced Space Propulsion Laboratory at the Johnson Space Center from 1993 to 2005.

(9) Chang Díaz retired from NASA in 2005 to set up the Ad Astra Rocket Company, which became dedicated to the development of advanced plasma rocket propulsion technology. (10) Years of research and development have produced the VASIMR (Variable Specific Impulse Magnetoplasma Rocket), an electrical propulsion device for use in space. (11) With a flexible mode of operation, the rocket can achieve very high exhaust speeds, and it even has the theoretical capability to take a manned rocket to Mars in 39 days.

There are five passive sentences in this passage: sentences 2, 4, 5, 7, and 10. Let's look at each sentence individually.

How to Succeed in College Composition I- Process Analysis Essay

Introduction to Voice Computing in Python.pdf

The technology of voice .docx