In this outcome, we will discuss chemical bonds and reactions.

All elements are most stable when their outermost shell is filled with electrons according to the octet rule. This is because it is energetically favorable for atoms to be in that configuration and it makes them stable. However, since not all elements have enough electrons to fill their outermost shells, atoms form chemical bonds with other atoms thereby obtaining the electrons they need to attain a stable electron configuration. When two or more atoms chemically bond with each other, the resultant chemical structure is a molecule. The familiar water molecule, H2O, consists of two hydrogen atoms and one oxygen atom; these bond together to form water, as illustrated in Figure 1. Atoms can form molecules by donating, accepting, or sharing electrons to fill their outer shells.

Figure 1. Two or more atoms may bond with each other to form a molecule. When two hydrogens and an oxygen share electrons via covalent bonds, a water molecule is formed.

An example of a simple chemical reaction is the breaking down of hydrogen peroxide molecules, each of which consists of two hydrogen atoms bonded to two oxygen atoms (H2O2). The reactant hydrogen peroxide is broken down into water, containing one oxygen atom bound to two hydrogen atoms (H2O), and oxygen, which consists of two bonded oxygen atoms (O2). In the equation below, the reaction includes two hydrogen peroxide molecules and two water molecules. This is an example of a balanced chemical equation, wherein the number of atoms of each element is the same on each side of the equation. According to the law of conservation of matter, the number of atoms before and after a chemical reaction should be equal, such that no atoms are, under normal circumstances, created or destroyed.

Even though all of the reactants and products of this reaction are molecules (each atom remains bonded to at least one other atom), in this reaction only hydrogen peroxide and water are representative of a subclass of molecules known as compounds: they contain atoms of more than one type of element. Molecular oxygen, on the other hand, as shown in Figure 2, consists of two doubly bonded oxygen atoms and is not classified as a compound but as an element.

Figure 2. The oxygen atoms in an O2 molecule are joined by a double bond.

Some chemical reactions, such as the one shown above, can proceed in one direction until the reactants are all used up. The equations that describe these reactions contain a unidirectional arrow and are irreversible. Reversible reactions are those that can go in either direction. In reversible reactions, reactants are turned into products, but when the concentration of product goes beyond a certain threshold (characteristic of the particular reaction), some of these products will be converted back into reactants; at this point, the designations of products and reactants are reversed. This back and forth continues until a certain relative balance between reactants and products occurs—a state called equilibrium. These situations of reversible reactions are often denoted by a chemical equation with a double headed arrow pointing towards both the reactants and products.

In biological reactions, however, equilibrium is rarely obtained because the concentrations of the reactants or products or both are constantly changing, often with a product of one reaction being a reactant for another. To return to the example of excess hydrogen ions in the blood, the formation of carbonic acid will be the major direction of the reaction. However, the carbonic acid can also leave the body as carbon dioxide gas (via exhalation) instead of being converted back to bicarbonate ion, thus driving the reaction to the right by the chemical law known as law of mass action. These reactions are important for maintaining the homeostasis of our blood.

Anabolic pathways require an input of energy to synthesize complex molecules from simpler ones. Synthesizing sugar from CO2 is one example. Other examples are the synthesis of large proteins from amino acid building blocks, and the synthesis of new DNA strands from nucleic acid building blocks. These biosynthetic processes are critical to the life of the cell, take place constantly, and demand energy provided by ATP and other high-energy molecules like NADH (nicotinamide adenine dinucleotide) and NADPH (Figure 3).

ATP is an important molecule for cells to have in sufficient supply at all times. The breakdown of sugars illustrates how a single molecule of glucose can store enough energy to make a great deal of ATP, 36 to 38 molecules. This is a catabolic pathway. Catabolic pathways involve the degradation (or breakdown) of complex molecules into simpler ones. Molecular energy stored in the bonds of complex molecules is released in catabolic pathways and harvested in such a way that it can be used to produce ATP. Other energy-storing molecules, such as fats, are also broken down through similar catabolic reactions to release energy and make ATP (Figure 3).

It is important to know that the chemical reactions of metabolic pathways don’t take place spontaneously. Each reaction step is facilitated, or catalyzed, by a protein called an enzyme. Enzymes are important for catalyzing all types of biological reactions—those that require energy as well as those that release energy.

Figure 4. Compare the protein-ligand interaction to the enzyme-substrate interaction. Notice that both binding proteins and enzymes have binding sites for their ligands (L) and substrates (S), respectively. This area of the enzyme is called the active site because it also contains amino acids that are important for the conversion of substrate to product.

You can often recognize that a protein is an enzyme by its name. Many enzyme names end with -ase. For example, the enzyme lactase is used to break down the sugar lactose, found in mammalian milk. Other enzymes are known by a common name, such as pepsin, which is an enzyme that aids in the digestion of proteins in your stomach by breaking the peptide bonds in the proteins.

Enzymes are catalysts, meaning that they make a reaction go faster, but the enzymes themselves are not altered by the overall reaction. Examine this image to see how enzymes work.

The amino acids in the active site of enzymes play two roles, and sometimes those roles overlap. Some of the amino acids in the active site are responsible for binding of the substrate and others are responsible for facilitating the chemical reaction. Enzymes are generally quite specific for their substrates. Although lactase and pepsin both catalyze the same type of reaction, breaking a bond using water (hydrolysis: "hydro" means "water" and "lysis" means "to break"), lactase only functions when lactose is its substrate and pepsin can only break peptide bonds.

Enzyme A. The active site on this enzyme is the same shape as lactose. The hexagonal shape on the lactose is a poor fit for the rectangular shaped active site on enzyme B. 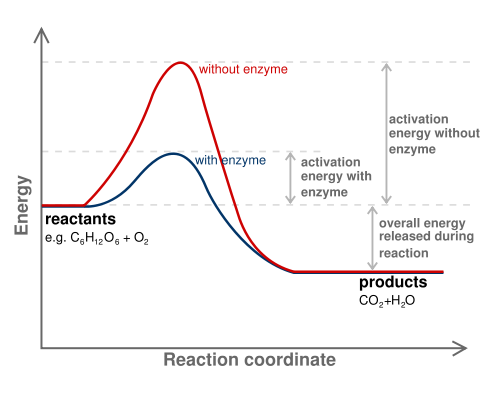 Figure 6. Diagram of a catalytic reaction showing difference in activation energy in uncatalysed and catalysed reaction. The enzyme reduces the energy barrier required to activate the substrate, allowing more substrates to become activated, which increases the rate of product formation. Note that the energy difference between the substrate and the product is not changed by the enzyme.

First, the enzyme binds to the substrate and slightly distorts its shape. The change in shape activates the substrate molecule and decreases the total activation energy required for the substrate to be turned into product. As the number of activated substrate molecules increases, so does the conversion of substrate to product. An analogy for this effect is a ski hill, with skiers at the bottom of one side of the hill representing substrates, skiers on the top of the hill representing activated substrates, and the products being the number of skiers that ski down the other side. If the height of the hill is lowered (due to the presence of the enzyme), then more skiers can make it to the top, increasing the number that ski down to become products.

What will happen to the rate at which a chemical reaction proceeds if the activation energy is increased?

Answer b. If the activation energy goes up, then more energy is required for the reaction to occur, so it will happen less often.

The outer electron shell dictates how readily and what type of chemical bonds a particular atom will form. The formation of compounds is often visually outlined in chemical equations which show the reactants participating in chemical reactions to form products.

Enzymes are proteins that speed up reactions by reducing the activation energy. Each enzyme typically binds only one substrate. Enzymes are not consumed during a reaction; instead they are available to bind new substrates and catalyze the same reaction repeatedly.

The Major Classes of Chemical Reactions