The DNA of prokaryotes is organized into a circular chromosome supercoiled in the nucleoid region of the cell cytoplasm. Proteins that are needed for a specific function are encoded together in blocks called operons. For example, all of the genes needed to use lactose as an energy source are coded next to each other in the lactose (or lac) operon.

In bacteria and archaea, structural proteins with related functions—such as the genes that encode the enzymes that catalyze the many steps in a single biochemical pathway—are usually encoded together within the genome in a block called an operon and are transcribed together under the control of a single promoter. This forms a polycistronic transcript (Figure 1). The promoter then has simultaneous control over the regulation of the transcription of these structural genes because they will either all be needed at the same time, or none will be needed.

Figure 1. In prokaryotes, structural genes of related function are often organized together on the genome and transcribed together under the control of a single promoter. The operon’s regulatory region includes both the promoter and the operator. If a repressor binds to the operator, then the structural genes will not be transcribed. Alternatively, activators may bind to the regulatory region, enhancing transcription.

French scientists François Jacob (1920–2013) and Jacques Monod at the Pasteur Institute were the first to show the organization of bacterial genes into operons, through their studies on the lac operon of E. coli. They found that in E. coli, all of the structural genes that encode enzymes needed to use lactose as an energy source lie next to each other in the lactose (or lac) operon under the control of a single promoter, the lac promoter. For this work, they won the Nobel Prize in Physiology or Medicine in 1965.

Although eukaryotic genes are not organized into operons, prokaryotic operons are excellent models for learning about gene regulation generally. There are some gene clusters in eukaryotes that function similar to operons. Many of the principles can be applied to eukaryotic systems and contribute to our understanding of changes in gene expression in eukaryotes that can result pathological changes such as cancer.

In prokaryotes, there are examples of operons whose gene products are required rather consistently and whose expression, therefore, is unregulated. Such operons are constitutively expressed, meaning they are transcribed and translated continuously to provide the cell with constant intermediate levels of the protein products. Such genes encode enzymes involved in housekeeping functions required for cellular maintenance, including DNA replication, repair, and expression, as well as enzymes involved in core metabolism. In contrast, there are other prokaryotic operons that are expressed only when needed and are regulated by repressors, activators, and inducers.

What are the parts in the DNA sequence of an operon?

An operon is composed of a promoter, an operator, and the structural genes. They must occur in that order.

What types of regulatory molecules are there?

There are three types of regulatory molecules: repressors, activators, and inducers.

The trp Operon: A Repressor Operon

Bacteria such as E. coli need amino acids to survive. Tryptophan is one such amino acid that E. coli can ingest from the environment. E. coli can also synthesize tryptophan using enzymes that are encoded by five genes. These five genes are next to each other in what is called the tryptophan (trp) operon (Figure 1). If tryptophan is present in the environment, then E. coli does not need to synthesize it and the switch controlling the activation of the genes in the trp operon is switched off. However, when tryptophan availability is low, the switch controlling the operon is turned on, transcription is initiated, the genes are expressed, and tryptophan is synthesized. 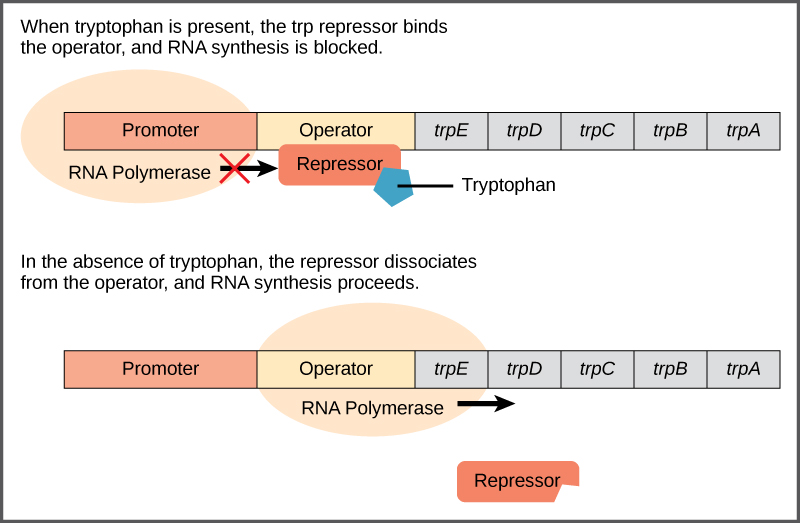 A DNA sequence called the operator sequence is encoded between the promoter region and the first trp coding gene. This operator contains the DNA code to which the repressor protein can bind. When tryptophan is present in the cell, two tryptophan molecules bind to the trp repressor, which changes shape to bind to the trp operator. Binding of the tryptophan–repressor complex at the operator physically prevents the RNA polymerase from binding, and transcribing the downstream genes.


Watch this video to learn more about the trp operon.

Just as the trp operon is negatively regulated by tryptophan molecules, there are proteins that bind to the operator sequences that act as a positive regulator to turn genes on and activate them. For example, when glucose is scarce, E. coli bacteria can turn to other sugar sources for fuel. To do this, new genes to process these alternate sugars must be transcribed. When glucose levels drop, cyclic AMP (cAMP) begins to accumulate in the cell. The cAMP molecule is a signaling molecule that is involved in glucose and energy metabolism in E. coli. When glucose levels decline in the cell, accumulating cAMP binds to the positive regulator catabolite activator protein (CAP), a protein that binds to the promoters of operons that control the processing of alternative sugars. When cAMP binds to CAP, the complex binds to the promoter region of the genes that are needed to use the alternate sugar sources (Figure 1). In these operons, a CAP binding site is located upstream of the RNA polymerase binding site in the promoter. This increases the binding ability of RNA polymerase to the promoter region and the transcription of the genes. 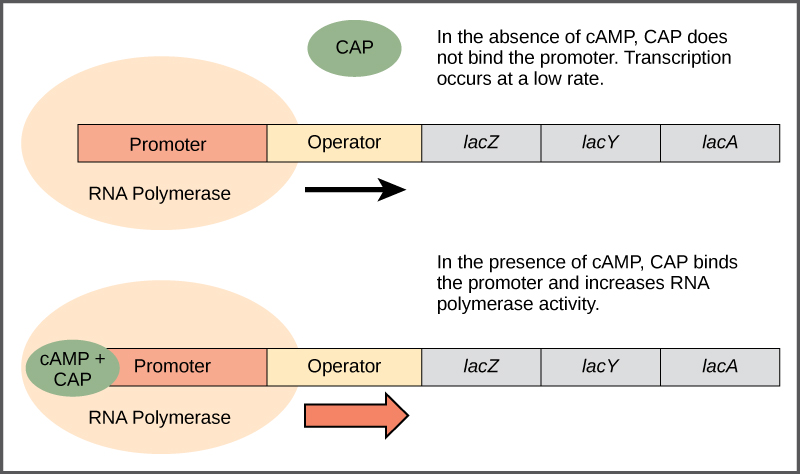 Figure 1. When glucose levels fall, E. coli may use other sugars for fuel but must transcribe new genes to do so. As glucose supplies become limited, cAMP levels increase. This cAMP binds to the CAP protein, a positive regulator that binds to an operator region upstream of the genes required to use other sugar sources.

The lac Operon: An Inducer Operon

The third type of gene regulation in prokaryotic cells occurs through inducible operons, which have proteins that bind to activate or repress transcription depending on the local environment and the needs of the cell. The lac operon is a typical inducible operon. As mentioned previously, E. coli is able to use other sugars as energy sources when glucose concentrations are low. To do so, the cAMP–CAP protein complex serves as a positive regulator to induce transcription. One such sugar source is lactose. The lac operon encodes the genes necessary to acquire and process the lactose from the local environment. CAP binds to the operator sequence upstream of the promoter that initiates transcription of the lac operon. However, for the lac operon to be activated, two conditions must be met. First, the level of glucose must be very low or non-existent. Second, lactose must be present. Only when glucose is absent and lactose is present will the lac operon be transcribed. This makes sense for the cell, because it would be energetically wasteful to create the proteins to process lactose if glucose was plentiful or lactose was not available.

Transcription of the lac operon is carefully regulated so that its expression only occurs when glucose is limited and lactose is present to serve as an alternative fuel source. 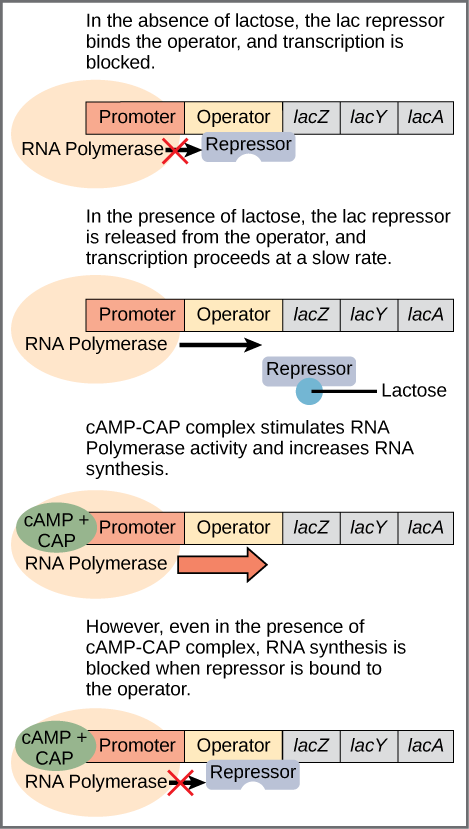 In E. coli, the trp operon is on by default, while the lac operon is off. Why do you think this is the case?

Tryptophan is an amino acid essential for making proteins, so the cell always needs to have some on hand. However, if plenty of tryptophan is present, it is wasteful to make more, and the expression of the trp receptor is repressed. Lactose, a sugar found in milk, is not always available. It makes no sense to make the enzymes necessary to digest an energy source that is not available, so the lac operon is only turned on when lactose is present.


Watch an animated tutorial about the workings of lac operon here.

Answer b. If glucose is absent, but so is lactose, the lac operon will be repressed.

Describe how transcription in prokaryotic cells can be altered by external stimulation such as excess lactose in the environment.

What is the difference between a repressible and an inducible operon?

A repressible operon uses a protein bound to the promoter region of a gene to keep the gene repressed or silent. This repressor must be actively removed in order to transcribe the gene. An inducible operon is either activated or repressed depending on the needs of the cell and what is available in the local environment.

As we've just learned, there are three types of regulatory molecules that can affect the expression of operons: repressors, activators, and inducers.

In the interactive below, we will focus on the differences between activators and repressors:

Click here for a text-only version of the activity.