Geologic structures such as faults and folds are the architecture of the earth's crust. Geologic structures influence the shape of the landscape, determine the degree of landslide hazard, bring old rocks to the surface, bury young rocks, trap petroleum and natural gas, shift during earthquakes, and channel fluids that create economic deposits of metals such as gold and silver.

Folds, faults, and other geologic structures accommodate large forces such as the stress of tectonic plates jostling against each other, and smaller forces such as the stress of gravity pulling on a steep mountainside. An understanding of the structures that shape the earth's crust can help you see when and where the crust was subjected to pushing or pulling, terrane accretion or crustal rifting.

Ductile rocks behave plastically and become folded in response to stress. Even in the shallow crust where rocks are cool and relatively brittle, folding can occur if the stress is slow and steady and gives the rock enough time to gradually bend. If the stress is applied too quickly, rocks in the shallow crust will behave as brittle solids and break. Deeper in the crust, where the rocks are more ductile, folding happens more readily, even when the stress and strain occurs rapidly.

In block diagrams like those shown below, the top of the block is the horizontal surface of the earth, the map view. The other two visible sides of the box are cross-sections, vertical slices through the crust. The colored layers represent stratified geologic formations that were originally horizontal, such as sedimentary beds or lava flows. Use the block diagrams to visualize the three-dimensional shapes of the geologic structures. Keep in mind that erosion has stripped away the upper parts of these structures so that map view reveals the interior of these structures.

In map view, a syncline appears as a set of parallel beds that dip toward the center. In a syncline the youngest beds, the ones that were originally on top of the rest of the beds, are at the center, along the axis of the fold.

Anticlines and synclines form in sections of the crust that are undergoing compression, places where the crust is being pushed together.

In map view, a plunging syncline makes a U-shaped or V-shaped pattern that opens in the direction of plunge. 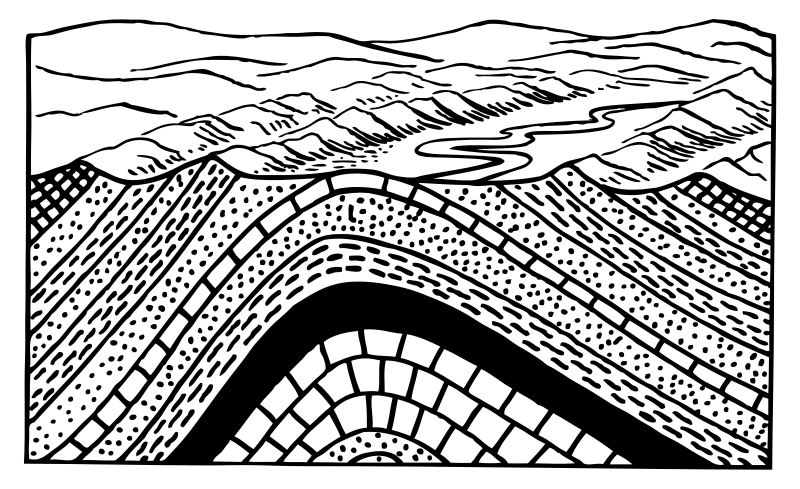 Figure 1. Diagram of an anticline.

In structural geology, an anticline is a fold that is convex up and has its oldest beds at its core. The term is not to be confused with antiform, which is a purely descriptive term for any fold that is convex up. Therefore if age relationships between various strata are unknown, the term antiform should be used.

On a geologic map, anticlines are usually recognized by a sequence of rock layers that are progressively older toward the center of the fold because the uplifted core of the fold is preferentially eroded to a deeper stratigraphic level relative to the topographically lower flanks. The strata dip away from the center, or crest, of the fold. 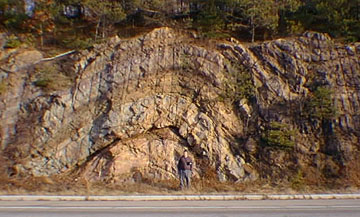 Figure 2. Anticline with syncline visible at far right. Note the man standing before the formation, for scale.

If an anticline plunges (i.e., is inclined to the Earth's surface), the surface strata will form Vs that point in the direction of plunge. Anticlines are often flanked by synclines although faulting can complicate and obscure the relationship between the two. Folds often form during crustal deformation as the result of shortening that accompanies orogenic mountain building. In many cases anticlines are formed by movement on non-planar faults during both shortening and extension, such as ramp anticlines and rollover anticlines.

Any fold whose form is convex upward is an antiform. Antiforms containing progressively younger rocks from their core outwards are anticlines.

An anticline or antiform has a crest, which is the highest point on a given stratum along the top of the fold. A hinge in an anticline is the locus of maximum curvature or bending in a given stratum in the fold. An axis is an imaginary line connecting the hinges in the different strata in a two-dimensional cross-section through the anticline. Connecting the hinges or points of maximum curvature in the different layers in three dimensions produces an axial plane or axial surface. In a symmetrical anticline, a surface trace of the axial plane coincides with the crest. With an asymmetrical anticline, the surface trace of the axial plane or axis will be offset from the crest toward the steeper flank of the fold. Anoverturned anticline is an asymmetrical anticline with a flank or limb that has been tilted beyond perpendicular so that the beds in that limb are upside-down.

A structure that plunges in all directions to form a circular or elongate structure is a dome. Domes are generally formed from one main deformation event, or via diapirism from underlying magmatic intrusions or movement of upwardly mobile, mechanically ductile material such as rock salt (salt dome) and shale (shale diapir). The Richat Structure of the Sahara is considered a dome that has been laid bare by erosion.

An anticline which plunges at both ends is termed a doubly plunging anticline, and may be formed from multiple deformations, or superposition of two sets of folds, or be related to the geometry of the underlying detachment fault and the varying amount of displacement along the surface of that detachment fault. The highest point on a doubly plunging anticline (or any geologic structure for that matter) is called the "culmination."

An elongate dome which developed as the sediments were being deposited is referred to as a pericline.

An anticlinorium is a series of anticlinal folds on a regional-scale anticline. Examples include the Late Jurassic to Early Cretaceous Purcell Anticlinorium in British Columbia and the Blue Ridge anticlinorium of northern Virginia and Maryland in the Appalachians, or the Nittany Valley in central Pennsylvania. 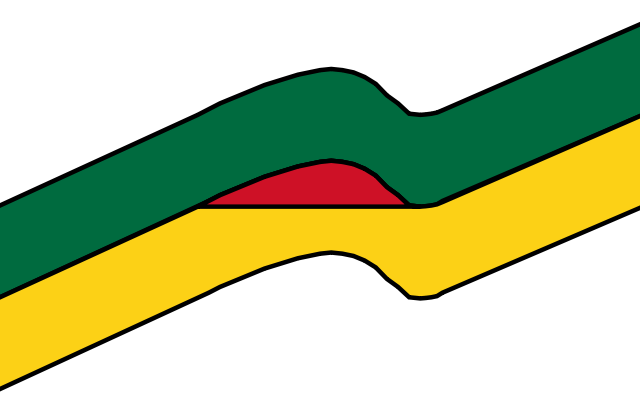 Doubly plunging or faulted anticlines, culminations, and structural domes are favored locations for oil and natural gas drilling; the low density of petroleum causes it to buoyantly migrate upward to the highest parts of the fold, until stopped by a low-permeability barrier such as an impermeable stratum or fault zone. Examples of low-permeability seals that contain the hydrocarbons, oil and gas, in the ground include shale, limestone, sandstone, and even salt domes. The actual type of stratum does not matter as long as it has low permeability.

Periclines are important focal points for pooling of hot, metal-laden formational brines, which can form manto ore deposits, Irish-type lead-zinc deposits and uranium deposits, amongst others.

Culminations in folded strata which are cut by shears and faults are favoured loci for deposition of saddle-reef style lode gold deposits. 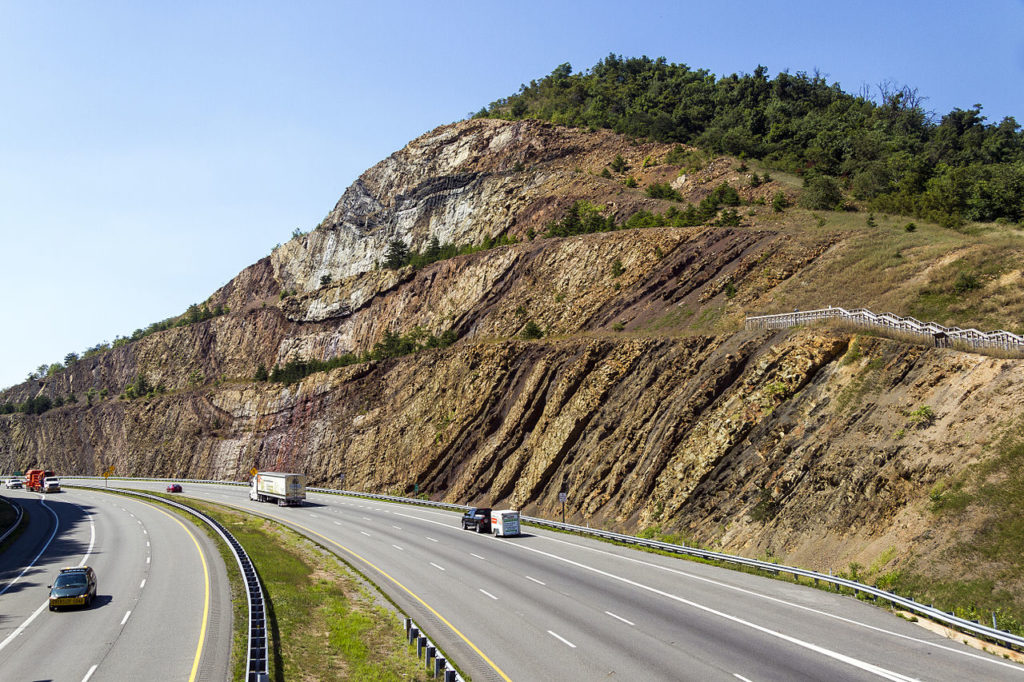 Figure 4. The Sideling Hill syncline as exposed in the Interstate 68 roadcut to the west of Hancock, Maryland, USA

In structural geology, a syncline is a fold with younger layers closer to the center of the structure. A synclinorium (plural synclinoriums or synclinoria) is a large syncline with superimposed smaller folds. Synclines are typically a downward fold, termed a synformal syncline (i.e. a trough); but synclines that point upwards, or perched, can be found when strata have been overturned and folded (an antiformal syncline).

On a geologic map, synclines are recognized by a sequence of rock layers that grow progressively younger, followed by the youngest layer at the fold's center or hinge, and by a reverse sequence of the same rock layers on the opposite side of the hinge. If the fold pattern is circular or elongate circular the structure is a basin. Folds typically form during crustal deformation as the result of compression that accompanies orogenic mountain building.

A fault is a planar surface within the earth, along which rocks have broken and slid. Faults are caused by elastic strain that culminates in brittle failure. The rocks on either side of a fault have shifted in opposite directions, called the offset directions. If a fault is not vertical, there are rocks above the fault and rocks beneath the fault.

In a normal fault, the hanging wall has moved down relative to the footwall.

A detachment fault is a particular kind of normal fault that generally dips at a low angle. It separates rocks that were deep in the crust and ductile (granite and gneiss) from rocks of the upper crust (sedimentary or volcanic) that were brittle. Detachment faults occur along the boundaries of metamorphic core complexes (see below).

Normal and detachment faults form in sections of the crust that are undergoing tension, places where the crust is being stretched apart. A divergent plate boundary is a zone of large normal faults. Normal faults also occur in other zones of crustal tension, such as in the Basin and Range landscape region of the western United States. 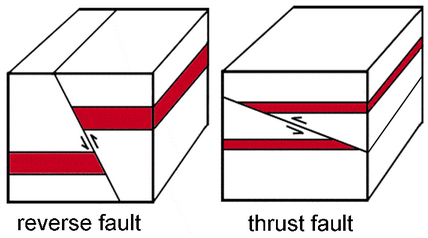 Strike-slip faults are steep or vertical faults along which the rocks on either side have moved horizontally in opposite directions.

How do plate motions create mountains? 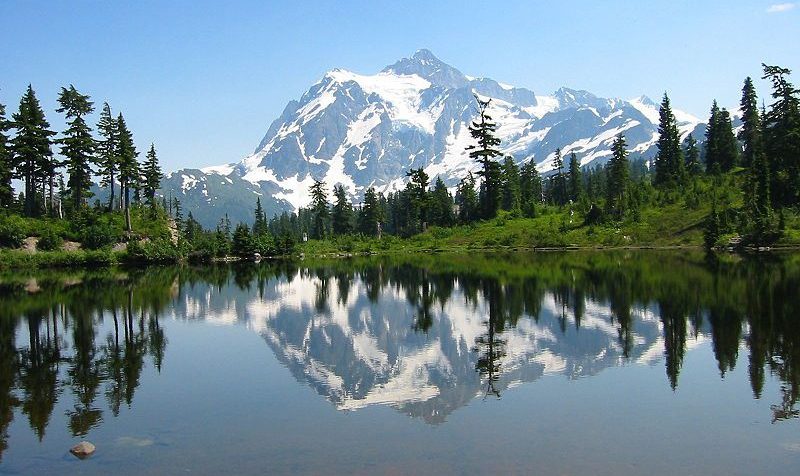 Plate tectonic processes create some of the world's most beautiful places. The North Cascades Mountains in Washington State are a continental volcanic arc. The mountains currently host some glaciers and there are many features left by the more abundant ice age glaciers. Changes in altitude make the range a habitable place for many living organisms.

Two converging continental plates smash upwards to create gigantic mountain ranges (Figure 5). Stresses from this uplift cause folds, reverse faults, and thrust faults, which allow the crust to rise upwards. As was stated previously there is currently no mountain range of this type in the western U.S., but we can find one where India is pushing into Eurasia. 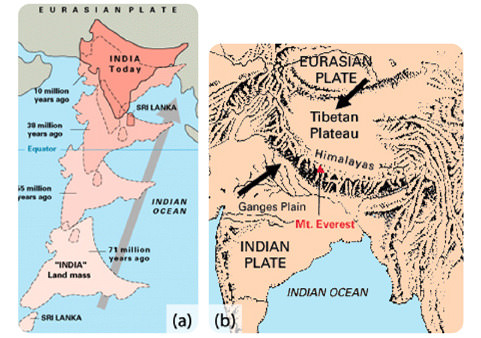 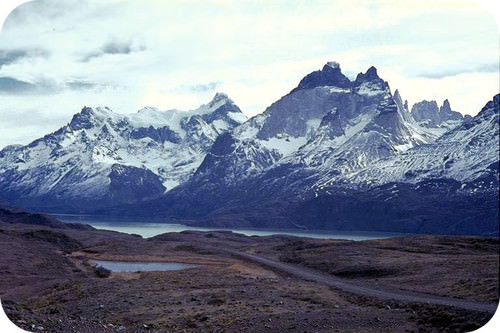 Figure 6. The Andes Mountains are a chain of continental arc volcanoes that build up as the Nazca Plate subducts beneath the South American Plate.

Subduction of oceanic lithosphere at convergent plate boundaries also builds mountain ranges. This happens on continental crust, as in the Andes Mountains (Figure 6), or on oceanic crust, as with the Aleutian Islands, which we visited earlier. The Cascades Mountains of the western U.S. are also created this way.

Amazingly, even divergence can create mountain ranges. When tensional stresses pull crust apart, it breaks into blocks that slide up and drop down along normal faults. The result is alternating mountains and valleys, known as a basin-and-range (Figure 7). In basin-and-range, some blocks are uplifted to form ranges, known as horsts, and some are down-dropped to form basins, known as grabens.

Figure 7. (a) Horsts and grabens. (b) Mountains in Nevada are of classic basin-and-range form.

Watch this quick animation of movement of blocks in a basin-and-range setting.