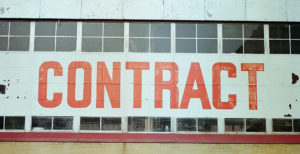 
A contract is a voluntary arrangement between two or more parties that is enforceable as a binding legal agreement.

A contract arises when the parties concur that there is an agreement. Formation of a contract generally requires an offer, acceptance, consideration, and a mutual intent to be bound. Each party to a contract must have capacity to enter the agreement. Minors, intoxicated persons, and those under a mental affliction may have insufficient capacity to enter a contract.

A contract may be oral or written, and the lack of a writing does not automatically make the contract void. English law and later U.S. law, however, recognized that oral contracts were subject to fraudulent claims by unscrupulous parties, and so developed the “Statute of Frauds” requiring that certain types of contracts be put into writing in order to be enforceable.

Under U.S. law, a contract must have four essential elements in order to be valid:

The following video explains these requirements in greater detail.

We speak of contracts as being either enforceable (legally binding) or unenforceable. An enforceable contract creates legal obligations, and the failure to comply with them creates a breach of contract.

When a party fails to live up to its obligations under the contract, he is said to have breached the agreement or to be in breach of contract. In the case of a breach of contract, the party that has suffered as a result of the breach may be granted one or more of the following remedies:

Since almost every exchange in business creates some form of contract, it is essential that business owners as well as consumers understand the fundamental principles of contracts and contract laws.

CONTRACT - INTRODUCTION AND CLASSIFICATION OF CONTRACT.docx

CONTRACT - INTRODUCTION AND CLASSIFICATION OF CONTRACT.docx

PROFE03_CHAPTER 9 INTRODUCTION TO BASIC CONCEPTS AND ACCOUNTING FOR FORWARD CONTRACTS.pdf

Lecture 5 Introduction to the law of contract

FORMATION OF A CONTRACT - INTRODUCTION.pptx

LAWS 1120   •  The University of Western Australia