Putting It Together: Teamwork and Communication 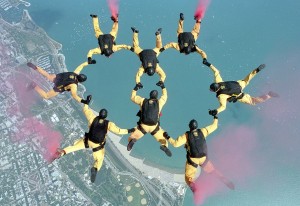 What did it take for these eight people to jump out of a perfectly good airplane and join hands to form a figure eight? Yes, nerves of steel and a measure of pure insanity. But it also took something else—the very thing you learned about in this chapter: teamwork and communication. As for these skydivers, the consequences of poor teamwork and faulty communication can be serious and even deadly. Defective parts can wind up in automobiles and airplanes, the wrong medications can be given to patients in a hospital, food can be contaminated . . . all as a result of poor teamwork and communication. Understanding the ways in which people communicate and overcome potential barriers can help you be a more effective communicator and a better team member. Moreover, the skills you've learned in this chapter are not only important in business—they're useful in skydiving and life.

In this chapter you learned about the importance of teamwork and communication in business. Below is a summary of the key points that were covered.

Teams are groups of individuals with complementary skills who come together to achieve a specific goal. Teams can be manager-led, self-directed, cross-functional, or even virtual. Companies use teams because they are an effective means of achieving objectives, and they bring increased efficiency to operations.

When teams are formed they evolve from individuals into a cohesive unit. The stages of team development are forming, storming, norming, performing, and adjourning.

What differentiates a successful team from an unsuccessful one? Some of the hallmarks of successful teams are the following: the members trust one another, common goals, defined team roles and responsibilities, good communication, and group cohesion.

Communication involves a sender, a message, and a receiver. The form a message takes is called a channel. Communication can occur between different kinds of senders and receivers within (and outside of) an organization. Communication can flow upward, downward, horizontally, diagonally, and externally. It can also flow through different networks, both informal and informal.

The rise of information technology that makes business communication faster and more efficient brings unique ethical challenges and risks. Businesses must take steps to keep employee and customer data safe; they must also establish security measures to protect against cyber threats such as malware, hacking, and theft.

Putting It Together- Teamwork and Commu...tion to Business and Management (2192).pdf

Multicultural Differences that affect Teamwork and Communication (1)Team B

LESSON 7_Putting it together word format.pdf

Analyzing Teamwork in the Business Environment.docx

Importance of Communication in Business.docx

Putting the pedal to the metal.docx

BMGT 245 •  Polytechnic University of the Philippines