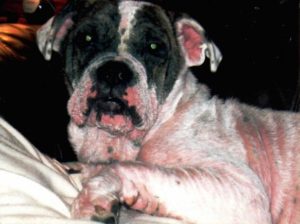 Several years ago, Wanda went to the local animal shelter looking for a new dog, and when she arrived, the most pathetic-looking bulldog-boxer mix she had ever seen greeted her. The puppy had terrible skin problems, had lost almost all of his fur, and his skin was pink from scratching. The poor thing looked like a naked mole rat, but Wanda fell in love with him on the spot. She promptly filled out the paperwork, named him Cosmo, and took him to the vet. Her vet was cautiously optimistic about the dog's prospects for recovery but advised Wanda that, in addition to medication, Wanda would have to be very careful about what she fed him. As a result, Wanda began to research dog food and was horrified at the low quality of the foods and treats available. She looked into healthier alternatives and, after some experimentation, developed several recipes that Cosmo could tolerate. As her friends watched the evolution of Cosmo from sickly pup to happy dog, they began to ask Wanda to bake those treats for their dogs, as well. Soon, friends of friends were calling her for her creations, and before she knew it, Wanda was in the gourmet dog-treat business. 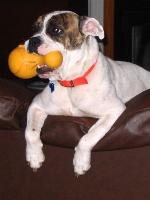 As a result of this blossoming interest in what she was doing, Wanda has been successfully baking and selling dog treats out of her home for the past several years, using the product name “Salty Pawz.” The demand for her custom dog treats has grown to the point that she has a couple of friends who help her on a regular basis. Several months ago, she began selling her treats on Etsy.com. Since then, her online orders have started to outpace her capacity. This month, her brother-in-law set up a Web site for Salty Pawz. At first she was excited that more people would have access to her products, but she didn't anticipate how many orders it would generate.

She has been talking to entrepreneurs in her hometown to get advice about taking her operation “to the next level.” She has questions and concerns about almost every aspect of business—finances, business structure, marketing, production, and overall strategy: Does she even want to grow Salty Pawz further? And if so, how would she grow it successfully?

Introduction and description of project background.docx

Salty Pawz to the Global Market.docx