To understand how open market operations affect the money supply, consider the balance sheet of Happy Bank, displayed in Figure 1. Figure 1(a) shows that Happy Bank starts with $460 million in assets, divided among reserves, bonds and loans, and $400 million in liabilities in the form of deposits, with a net worth of $60 million. When the central bank purchases $20 million in bonds from Happy Bank, the bond holdings of Happy Bank fall by $20 million and the bank’s reserves rise by $20 million, as shown in Figure 1(b). However, Happy Bank only wants to hold $40 million in reserves (the quantity of reserves that it started with in Figure 1(a), so the bank decides to loan out the extra $20 million in reserves and its loans rise by $20 million, as shown in Figure 1(c). The open market operation by the central bank causes Happy Bank to make loans instead of holding its assets in the form of government bonds, which expands the money supply. As the new loans are deposited in banks throughout the economy, these banks will, in turn, loan out some of the deposits they receive, triggering the money multiplier and increasing the supply of money. 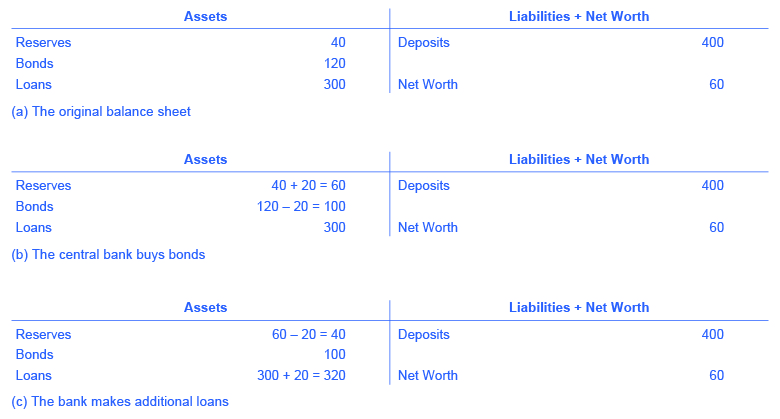 Figure 1. Balance Sheets for Happy Bank. Figure 1(a) shows that Happy Bank starts with $460 million in assets. In (b), the Federal Reserve purchases $20 million in bonds from Happy Bank, which lowers Happy Bank's bonds holdings, but increases their bank reserves by $20 million. In (c), Happy Bank decides to loan out that $20 million, thereby increasing their loans.

Open market operations can also reduce the quantity of money and loans in an economy. Figure 2(a) shows the balance sheet of Happy Bank before the central bank sells bonds in the open market. When Happy Bank purchases $30 million in bonds, Happy Bank sends $30 million of its reserves to the central bank, but now holds an additional $30 million in bonds, as shown in Figure 2(b). However, Happy Bank wants to hold $40 million in reserves, as in Figure 2(a), so it will adjust down the quantity of its loans by $30 million, to bring its reserves back to the desired level, as shown in Figure 2(c). In practical terms, a bank can easily reduce its quantity of loans. At any given time, a bank is receiving payments on loans that it made previously and also making new loans. If the bank just slows down or briefly halts making new loans, and instead adds those funds to its reserves, then its overall quantity of loans will decrease. A decrease in the quantity of loans also means fewer deposits in other banks, and other banks reducing their lending as well, as the money multiplier takes effect. And what about all those bonds? How do they affect the money supply? Read on to find out. 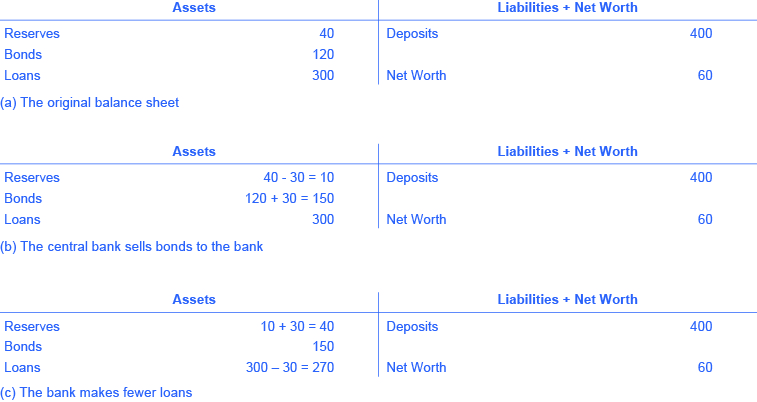 DOES SELLING OR BUYING BONDS INCREASE THE MONEY SUPPLY?

Watch this video to review how the FED uses open market operations to influence interest rates.