It is straightforward to calculate profits of given numbers for total revenue and total cost. However, the size of monopoly profits can also be illustrated graphically with Figure 1, which takes the marginal cost and marginal revenue curves from the previous exhibit and adds an average cost curve and the monopolist's perceived demand curve. 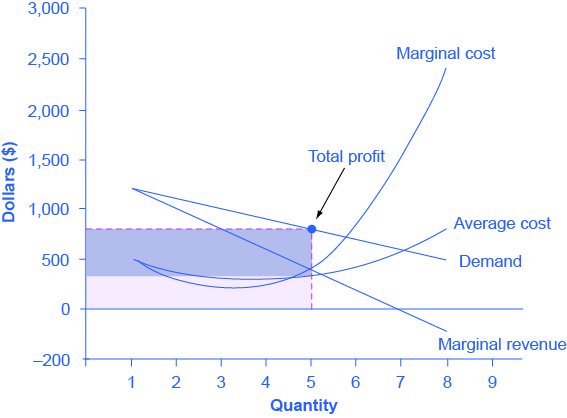 Figure 1. Illustrating Profits at the HealthPill Monopoly. This figure begins with the same marginal revenue and marginal cost curves from the HealthPill monopoly from the previous page. It then adds an average cost curve and the demand curve that the monopolist faces. The HealthPill firm first chooses the quantity where MR = MC. In this example, the quantity is 5. The monopolist then decides what price to charge by looking at the demand curve it faces. For a quantity of 5, the corresponding price on the demand curve is $800. The large box, with quantity on the horizontal axis and demand (which shows the price) on the vertical axis, shows total revenue for the firm. The lighter-shaded box, which is quantity on the horizontal axis and average cost of production on the vertical axis shows the firm's total costs. The large total revenue box minus the smaller total cost box leaves the darkly shaded box that shows total profits. Since the price charged is above average cost, the firm is earning positive profits.

The three-step process where a monopolist selects the profit-maximizing quantity to produce, decides what price to charge, and then determines total revenue, total cost and profit. These steps include:

Step 1: The Monopolist Determines Its Profit-Maximizing Level of Output

Step 2: The Monopolist Decides What Price to Charge

The monopolist will charge what the market is willing to pay. A dotted line drawn straight up from the profit-maximizing quantity to the demand curve shows the profit-maximizing price which, in Figure 1, is $800. This price is above the average cost curve, which shows that the firm is earning profits.

Total revenue is the overall shaded box, where the width of the box is the quantity sold and the height is the price. In Figure 1, this is 5 x $800 = $4000. The bottom part of the shaded box, which is shaded more lightly, shows total costs; that is, quantity on the horizontal axis multiplied by average cost on the vertical axis or 5 x $330 = $1650. The larger box of total revenues minus the smaller box of total costs will equal profits, which the darkly shaded box shows. Using the numbers gives $4000 - $1650 = $2350. In a perfectly competitive market, the forces of entry would erode this profit in the long run. However, a monopolist is protected by barriers to entry. In fact, one obvious sign of a possible monopoly is when a firm earns profits year after year, while doing more or less the same thing, without ever seeing increased competition eroding those profits.

In a perfectly competitive market, the forces of entry would erode this profit in the long run. But a monopolist is protected by barriers to entry. In fact, one telltale sign of a possible monopoly is when a firm earns profits year after year, while doing more or less the same thing, without ever seeing those profits eroded by increased competition.

Let's apply these concepts to a problem. Watch the video to walk through the steps of finding total profit for a monopolist under the following conditions: