Most people approach their utility-maximizing combination of choices in a step-by-step way. This step-by-step approach is based on looking at the tradeoffs, measured in terms of marginal utility, of consuming less of one good and more of another. You can think of this step-by-step approach as the “biggest bang for the buck” principle. For example, say that José starts off thinking about spending all his money on T-shirts and choosing point P, which corresponds to four T-shirts and no movies, as illustrated in Figure 1. 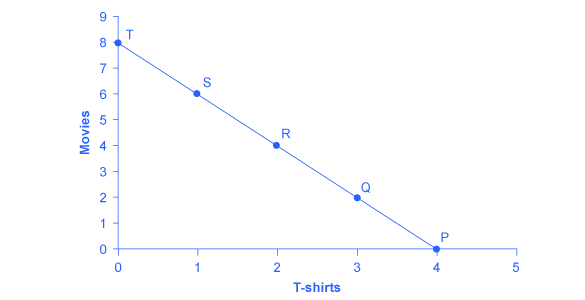 Figure 1. A Choice between Consumption Goods. José has income of $56. Movies cost $7 and T-shirts cost $14. The points on the budget constraint line show the combinations of movies and T-shirts that are affordable.

José chooses this starting point randomly; he has to start somewhere. Then he considers giving up the last T-shirt, the one that provides him the least marginal utility, and using the money he saves to buy two movies instead. Table 1 tracks the step-by-step series of decisions José needs to make (Key: T-shirts cost $14, movies cost $7, and Jose's income is $56).

José could use the following thought process (if he thought in utils) to make his decision regarding how many T-shirts and movies to purchase:

Step 5. So, for José, it makes sense to give up the fourth T-shirt in order to buy two movies.

However, if José seeks to go beyond point S to point T, he finds that the loss of marginal utility from giving up the first T-shirt is 22, while the marginal utility gain from the last two movies is only a total of 19. If José were to choose point T, his utility would fall to 100. Through these stages of thinking about marginal tradeoffs, José again concludes that S, with one T-shirt and six movies, is the choice that will provide him with the highest level of total utility. This step-by-step approach will reach the same conclusion regardless of José's starting point.

This approach to finding consumer equilibrium is somewhat tedious. Next, we'll turn to a quicker and more intuitive approach.

A Rule for Maximizing Utility

A Rule for maximizing Utility

If a consumer wants to maximize total utility, for every dollar that they spend, they should spend it on the item which yields the greatest marginal utility per dollar of expenditure.

Another Rule for Maximizing Utility

This argument can be written as another rule: the utility-maximizing choice between consumption goods occurs where the marginal utility per dollar is the same for both goods, and the consumer has exhausted his or her budget.


P1​MU1​​=P2​MU2​​
A sensible economizer will pay twice as much for something only if, in the marginal comparison, the item confers twice as much utility. Notice that the formula for the table above is


1422​=711​
1.6=1.6
The following feature provides step-by-step guidance for this concept of utility-maximizing choices.

Another Rule for Maximizing Utility

The rule,
P1​MU1​​=P2​MU2​​
, means that the last dollar spent on each good provides exactly the same marginal utility. So:

Step 2. Products, however, usually cost more than a dollar, so we cannot trade a dollar's worth of movies. The best we can do is trade two movies for another T-shirt, since in this example T-shirts cost twice what a movie does.

Step 3. If we trade two movies for one T-shirt, we would end up at point R (two T-shirts and four movies).

Step 4. Choice 4 in Table 3 shows that if we move to point S, we would lose 21 utils from one less T-shirt, but gain 23 utils from two more movies, so we would end up with more total utility at point S.

In short, the rule shows us the utility-maximizing choice.

This video applies these same concepts to a graph. It demonstrates how there will come a point when the marginal utility per dollar of one good goes down enough so that it makes more sense to buy another good.

This discussion of utility started off with an assumption that it is possible to place numerical values on utility, an assumption that may seem questionable. You can buy a thermometer for measuring temperature at the hardware store, but what store sells an "utilimometer" for measuring utility? However, while measuring utility with numbers is a convenient assumption to clarify the explanation, the key assumption is not that utility can be measured by an outside party, but only that individuals can decide which of two alternatives they prefer.

To understand this point, think back to the step-by-step process of finding the choice with highest total utility by comparing the marginal utility that is gained and lost from different choices along the budget constraint. As José compares each choice along his budget constraint to the previous choice, what matters is not the specific numbers that he places on his utility—or whether he uses any numbers at all—but only that he personally can identify which choices he prefers.

In this way, the step-by-step process of choosing the highest level of utility resembles rather closely how many people make consumption decisions. We think about what will make us the happiest; we think about what things cost; we think about buying a little more of one item and giving up a little of something else; we choose what provides us with the greatest level of satisfaction. The vocabulary of comparing the points along a budget constraint and total and marginal utility is just a set of tools for discussing this everyday process in a clear and specific manner. It is welcome news that specific utility numbers are not central to the argument, since a good utilimometer is hard to find. Do not worry—while we cannot measure utils, by the end of the next module, we will have transformed our analysis into something we can measure—demand.

Click through the buttons in this simulation to think about applications of utility.

First, you'll imagine that you are desperately searching for food and water on a hot day. Given the heat and your time constraints, you'll need to decide what to obtain first based on its utility. Then, you can see these combinations on a graph and consider what the utility of each choice would be.

Be sure to choose the option to "learn more about marginal utility per dollar spent" so that you can see how marginal-decision making comes into play when choosing to forage for either apples or berries.

the combination of goods and services that will maximize an individual's total utilitymarginal utility per dollar:

the additional satisfaction gained from purchasing a good given the price of the product; MU/Price